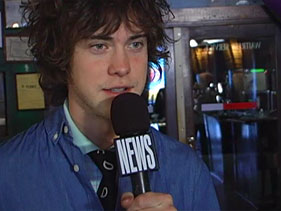 MGMT didn’t set out to make the stereotypical sophomore album, but, in a roundabout way, that’s exactly what the upcoming Congratulations (due April 13) is.

An ambitious, swirling, downright paranoid thing, full of songs that try very hard to shed much of the fanbase the band  earned with the success of “Kids,” Congratulations is very much the end product of a young band facing the twin specters of fame and expectation, staring them down, then saying “F— it, let’s go surfing.”

Which, of course, is exactly how the guys planned it.

“I think the album in general is kind of, like, lyrically and musically, a reaction to fame and success. We said that it wasn’t going to be, but then we realized that was impossible, because we were just writing songs that were coming from whatever mindset we were in at the time,” MGMT’s Andrew Van Wyngarden told MTV News.

“And the mindset we were in was post year-and-a-half of touring, chaos, like we had been in a tornado of chaos, so we didn’t really know what to do, so we wrote songs that ended up being about that. But they’re also about that pseudo-mystical … bullsh–.”

Case in point – the title track, which Van Wyngarden describes as “kind of meandering upon the possibly negative effects of success,” or the very weird “Lady Dada’s Nightmare,” which is about, well …

“It’s about having sex with Lady Gaga,” Van Wyngarden laughed.

Congratulations is a very heady trip indeed, featuring 12-minute songs about surfing in Siberia, jittery odes to Brian Eno and the first single, a kitchen-sink affair called “Flash Delerium”. There’s a whole lot to digest, which is why the band (supposedly) decided to have fans hear it as an entire piece, rather than through a string of singles. Though these days  MGMT maintain that whole ideal was taken out of context.

“We didn’t say that we weren’t releasing singles. What we said was that this album didn’t really have immediately accessible, catchy dance songs, like the first album had … I don’t even know why I said that,” Van Wyngarden sighs. “But we kind of felt like it’s something that’s best first listened to as a whole, though, as it turns out, we did release a single. You know, ‘Flash Delerium.’ ”

And though it was probably difficult to pry one song out of Congratulations’ craw, “Delerium” works as the first single, most notably because it serves notice that MGMT have been through the ringer.

“It’s kind of the most, um, everywhere-at-once song on the album; it’s like chaos. It’s supposed to be about kind of going nuts and feeling completely overwhelmed, and everything’s falling apart,” Van Wyngarden laughed.  “And it’s funny to watch people’s reactions to it, because it’s kind of a love-it-or-hate it thing … we just kind of kept piecing it together, just wanted to make something that felt like you were going mad. And there’s nothing really pleasant about that.

“We went through periods of paranoia, where there’s all these people around you telling you things, then you never really know if you’re doing something bad,” he continued. “I think that’s why a lot of artists make really crappy albums, because everybody’s telling them it’s so good … so we don’t know if our new album is crap or not.”