A studio that has been a champion of stopping piracy is now facing awkward accusations that it showed counterfeit luggage in a hit movie. 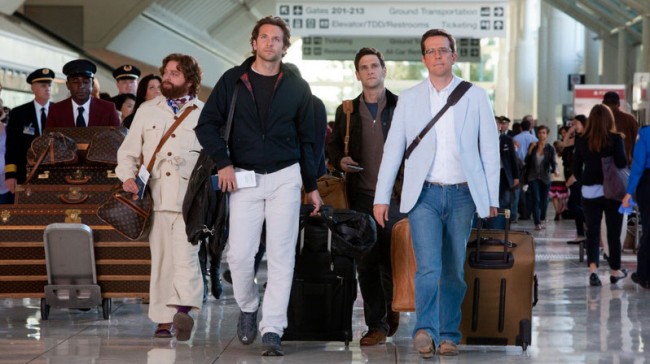 In a complaint filed Thursday in Manhattan, luxury goods maker Louis Vuitton accused Warner Bros of ignoring its instructions not to use a fake handbag in an airport scene in the Hangover II. In the scene, Alan (played by Zach Galifianakis) carries luggage marked LVM and warns another character “Careful, that is.. that is a Louis Vuitton.”

According to the complaint, the item in question is not in fact a Louis Vuitton but was instead made by a Chinese American firm called Diophy. Louis Vuitton is currently suing Diophy before the International Trade Commission in the hopes of getting its knock-off products banned from the United States.

Louis Vuitton says that Alan’s “Careful, that’s a Louis Vuitton” line been become a popular catchphrase and that the movie has produced consumer confusion. Its lawsuit also claims that there has been gossip and Internet buzz about whether or not Alan’s bag is real. Louis Vuitton has long been an obsession of sorts with certain celebrities and fashionistas.

The luxury brand also claims that Warner Bros caused further harm by refusing to edit the bag scene before it released the movie on DVD.

This is not the first time that the studio has been tangled up in intellectual property issues with Hangover II. In June, it settled a copyright suit brought by a tattoo artist who claimed that it had used a Mike Tyson body design without permission.

If the Louis Vuitton allegations are true, they may prove a huge embarrassment for Warner Bros which has been part of a full-court press in Washington this month to pass a controversial law called SOPA (Stop Online Piracy Act).

The handbag maker is asking the court to grant an order to destroy all copies of the Hangover II and promotional materials that contain the airport scene with the fake bag. Louis Vuitton also wants profits from the film and triple damages.

It’s possible, of course, that the lawsuit is simply a publicity stunt to draw attention to piracy. If so, it’s working.