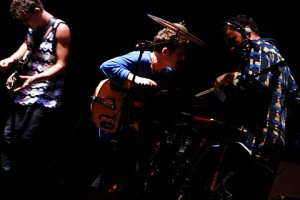 NEW YORK — It began with a benign four-minute ferry ride through calm waters to a little-trafficked landmass in the Upper New York Bay, but Saturday night at The Beach on Governors Island proved to be anything but gentle.

The droves of 20-something indie rockers who packed the tiny boat docked at Manhattan’s Pier 11 had come to hear the Los Angeles-based Local Natives, a band that has been growing in popularity and notoriety since the release of its debut album Gorilla Manor this February. In short, they got what they bargained for, and quite possibly more. The dudes from Silver Lake did not disappoint, bringing with them a ferocious edge to their normally placid, restrained sound, not to mention some additional talent on their coattails that could not be overlooked.

The Beach, though somewhat schmaltzy and decidedly off the beaten path, nevertheless proved an appropriate backdrop for a band seemingly on the rise. The fake palm trees and imported sand notwithstanding, the choice of venue represented at once an affirmation and a test for the new West Coast outfit, if not a cheap imitation of its home base. That the band found itself in the literal shadow of the glistening Lower Manhattan skyline made it evident it had demonstrated it had real talent in the run up to the show, but the setting also appeared to leave open the question of what will come next for the five-man show.

For those standing on the blacktop on the island — a detached cloister that must have stretched out to contain the sudden influx of young fans — the anticipation that had built up around the headliners’ appearance was painfully obvious, if not outright uncomfortable. The crowd made it through the talented but ultimately unremarkable Young Man as it weaved its way through a modest set. All throughout the eager showgoers focusing on keeping up digital conversations with those on the mainland and stereotypically jeering the opener’s frontman as he thanked everyone for the positive reception (“He’s so Midwestern,” one concertgoer quipped). A seemingly interminable set-up period yielded a second opening act, the Long Beach, Calif.-based We the Barbarians, who put on a strong, entertaining and memorable set that almost imitated the Natives sound, an unsurprising feat given the geographical proximity and friendship between the two bands. Still it was not enough to allay the audience’s antsiness for the indie rock headliner, a sentiment expressed by one concertgoer’s pointed joke that the members of Local Natives were still stuck on the ferry. Even We The Barbarians’ frontman acknowledged the difficulty of the suspense; after playing the second-to-last song of his band’s set, he remarked that it would not be too long before the throngs of 20-somethings packed on The Beach “got what they wanted.”

And get it they did. Local Natives’ set was a crowd-pleaser to the umpteenth degree, and for good reason. In striking a reasonable balance between its studio sound and forays into new territory where appropriate, the headliners proved they could push their limits while offering the quality material their fans had come to expect. More important, Local Natives did this in the most interesting of ways. Whether it was accentuating the trumpets on “Who Knows Who Cares” or slowing the tempo of “Warning Signs,” the L.A.-based band brought forth the most wonderful of surprises while maintaining control throughout, no small task for a group whose sound has been described as “afropop-influenced guitars with hyperactive drumming and hooky three-part harmonies.” On “Cards and Quarters” Local Natives showcased a new acoustic take, but only after demonstrating its prowess at musical jujitsu on “Camera Talk,” when it removed the strings from the studio version of the song and replaced them with a heavier but nonetheless fitting electric guitar piece. Though the set was composed solely of songs from Gorilla Manor — more than safe territory for the band — creativity was not lacking, even if it may have been elusive to spot for the untrained ear.

There was little missing from the show, which, according to the band, was its largest ever in New York, a recognition that fits the up-and-coming narrative surrounding the group. Local Natives did elect not to play the moody “Sticky Thread,” a decision that, given the high-powered set, made much sense. An amped-up “Airplanes,” one of the band’s later singles, drew the most attention from the crowd, which responded by going simply wild, with heads and bodies thrashing everywhere to no avail. But the true commingling between the band’s members and their fans came with Local Natives’ single encore performance, a redoubled, hypersonic rendition of one of its most recognizable pieces, the inimitable “Sun Hands.” Packing an extended acoustic intro, a new guitar solo and an apparently uncontrollable amount of energy into just over four minutes made for something along the lines of a religious experience, even for the most ardent nonbelievers in the crowd, and left everyone desiring more. That, however, was not to come, as the band made a hasty exit, quickly thanking the crowd before disappearing behind the stage. And with that, the satisfied concertgoers was left in a state of euphoric dismay, overjoyed at Local Natives’ innovative performance but glum at its departure.

The line to get back to the ferry to Manhattan — a queue that appeared to persist for hours due to the ill-conceived nature of the venue’s setup — provided an ample opportunity for reflection. Though most fans took to expressing their frustration at the prospect of being forever stuck on a small, isolated island amid the intractable wait, no one could deny that the evening had been a resounding success. We The Barbarians had caught everyone by surprise with its up-and-coming vibe and strong performance, and everyone seemed to agree Local Natives had clearly met the test that it had been confronted with at The Beach in proving it had the talent to proceed to the big leagues, which in this case, reside just across the river from Saturday night’s venue. Come late October fans will have an opportunity to once again assess the indie group’s progress when it plays the legendary Webster Hall in lower Manhattan. Until then, it is safe to guard against making any negative assumptions — only good times are in store for this rising act.