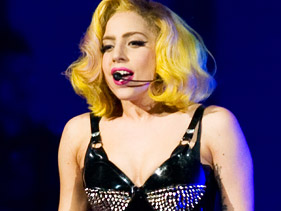 On Saturday, Lady Gaga took to her Facebook page to pen a letter requesting that her little monsters ignore a protest the Westboro Baptist Church was planning to hold outside her show in St. Louis.

“At the risk of drawing attention to a hateful organization, I would like to make my little monster fans aware of a protest being held outside the Monsterball in St. Louis tonight,” Gaga wrote. “Although we have had protesters before, as well as fundamentalists at the show, this group of protesters are hate criminals and preach using lewd and violent language and imagery that I wish I [could] protect you all from. Their message is of hatred and divisiveness, but inside at the Monsterball we preach love and unity.”

Local St. Louis news station KSDK reported that fans arriving for the singer’s Monster Ball show at the Scottrade Center were met by members of the Kansas-based church, known for their anti-gay protests at events and military funerals.

According to a fan video taken at the event, only about half a dozen Westboro protestors showed up. They were outnumbered by Gaga supporters who, rather than ignore the hate messages, chose to counteract them with their own signs (some with humorous messages like “God Hates Figs”), T-shirts and rainbow flags.

The counter-protest isn’t exactly what Gaga, who often talks about gay pride at her shows and during TV appearances, had asked of her fans.

“My request to all little monsters and public authorities is to pay these hate criminals no mind,” she wrote before the show. “Do not interact with them, or try to fight. Do not respond to any of their provocation. Don’t waste your words, or feelings, no matter what you hear or see you are more fortunate and blessed than they are, and in your heart just pray for them. Although I respect and do not judge anyone for their personal views on any politics or religion, this group in particular to me is violent and dangerous. I wanted to make my fans aware of my views on how to approach, or rather not approach, these kinds of hate activists.”

Closing the letter, the singer took a chance to remind fans the importance of not letting others interfere with their own values and appreciate that they don’t believe in the group’s hateful message. “Be inspired to ignore their ignorant message, and feel gratitude in your heart that you are not burdened or addicted to hate, as they are. X,” she concluded.

“Tonight love and hate met in St. Louis,” Gaga wrote. “And love outnumbered the hate, in poetic thousands. Hate left. But love stayed. + Together, we sang.”