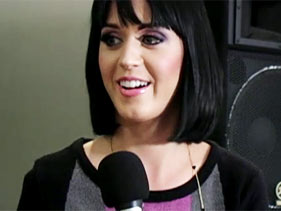 Well, actually, you’ll probably have her in your camp until about October, because that’s when she’ll begin work on the follow-up to her breakthrough “One of the Boys” album, which she pledges will be a strawberry-free affair.

“I definitely want to make a follow-up pop, fun record. I’m not looking to alienate my fans, but I can’t be that grown-up Shirley Temple girl wearing the stupid strawberry in her hair all the time … because I’d kill myself or someone else would for me,” Perry laughed. “So I’m really excited to always be evolving, and changing; with my look, with my music, it keeps me entertained as well.”

And she’s not stopping with the haberdashery, either. From the sound of things, Perry might be moving away from a lot of what made “Boys” a platinum success. You know … all the kissing of the girls and whatnot. Which means fans should prepare themselves for Katy Perry, the semi-adjusted sorta-adult.

“‘Boys‘  was like my ‘Dear Diary’ album, from when I was like 17 to 23. … It was my perspective then, and it was so widespread, and some of the things that really meant a lot to me at 17, you know, they change. They evolve,” she said. “So this record will be a very present record for me. It will be me now. It won’t take five years – hopefully. It will be Katy Perry as a young, 25-year-old woman.”

And one aspect of that young woman’s life that will definitely be covered on the new album is the near-constant tabloid attention. From digging into her past to covering her breakups and speculating on her spats, it seems the paps have been working overtime to make Perry’s life a nightmare. But, as a burgeoning pop star, she’s learning to take it all in stride. And keep it balanced.

“Well, all of this is new. You’re not born into all of this attention. So I’m learning how to deal with it all. And I was in a relationship prior to all of this, and so, unfortunately, when it didn’t work out, it just became public,” she said. “It’s one of those things where I try to keep it pretty level. I think people are naturally interested in the details of someone that’s living an extraordinary life, and I appreciate that. But I think, not only are people like, ‘What’s she wearing?,’ but I think they’re also interested in, like, ‘What’s waking up in Vegas like? What’s the tour like? What’s the next record going to be like?’ So I’m trying to keep the flow and the balance.”