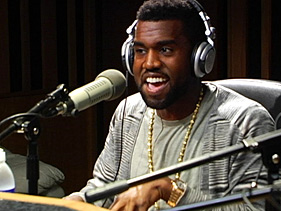 Kanye West is  definitely secure with his raps and with himself. On the Grammy stage on Sunday night, he laid the first verse on “Swagga Like Us,” knowing that he had three more acclaimed wordsmiths – Jay-Z, Lil Wayne and T.I. – coming after him on the track, and still felt confident that his rap held up in such strong company.

Kanye does exactly what he wants to do, so it’s no surprise that he took the stage in a sparkling jacket that could have come out of Michael Jackson’s closet in 1984.

Still, Kanye’s clothes have become a major topic lately. In a recent interview with MTV News, 50 Cent joked heavily about West’s choice of wardrobe. And Fif isn’t the only one: On the Internet, fans and bloggers alike have questioned the Chicago native’s garment picks.

In that interview, 50 denied that he was referring to West when he said in his song “Play This on the Radio,” “first they say, ‘That f—-t hot” – although in January, when 50 was a guest on DJ Whoo Kid’s satellite radio show, he hinted that he might have been talking about Kanye on the song when he made reference to West’s sexuality. When asked about the comments by MTV News last week, 50 told us with a grin, “I never said Kanye’s name.”

During a sitdown interview with Sway on Friday, West talked very candidly about a myriad of issues, including certain people not understanding his at times eccentric fashion statements.

Sway: Kanye, you’ve become a fashion icon. But along with the accolades you get for setting trends, like you did with the “Stronger” glasses and even the  “808s & Heartbreak” heart pendants, some people really mock you because of the way you dress. If you look on the Internet, there are even some of your peers and fans that say you “dress gay.” What does that mean to you?

West: Well, it’s like when people say, “Give me a natural pose.” You can’t pose natural. If you’re posing, then it’s not natural no more. So it’s statements that people say. “Dressing gay” you can’t dress like … Your dress don’t give away whether or not you like a man. Think about actors that straight dress up like a woman or something like that. People wanna label me and throw that on me all the time, but I’m so secure with my manhood. And that’s the reason why I can go to Paris, why I can have conversations with people who are blatantly gay.

‘Cause I used to be scared to talk to a gay person. It’s designers that’s scared of people in hip-hop. And in hip hop, there’s people – and let’s not even say scared like homophobic – but they’re scared of the way people gonna look at them. If you see a person be like, “I don’t wanna stand next to Marc Jacobs ’cause I don’t want that to bear on me because I’m just so cool.” One of the reasons why, the perspective I come from with my raps and my songs, the reason why can’t nobody dis me – no gangsta rapper, nobody can really dis me is ’cause it’s so authentic.

Sway: Tell me about the now-infamous Paris picture.

West: I’m gonna tell you something about the Paris pic. They was like, some of the people dressed in the outfits, I didn’t check out everybody’s outfit that hopped in the picture with me – I can’t be completely responsible. You go right into my outfit, my outfit is good. And see, like the [Fonzworth] Bentley video, “Everybody,” there was people calling me before we dropped it, like “Man y’all shouldn’t put that out with y’all dancing, man. People gonna say y’all gay!” And another thing is, people are so gay-conscious now. That’s like the whole thing like with the Internet – every day [is like], “Oh I can tell he gay now!” But back in the day, people used to have songs like “Get In That A–” or something like that. Someone would never make a song like that [today] because they’d be like “Whoa! I can’t make no song like that! People gonna call me gay!”

Sway: But that picture made so much noise. There was a lot of colors, right?

West: It was a lot of colors. Let me tell you another thing about … I’m doing a blog right now where I’ve been collecting all of the freshest stuff that’s rainbows – Denver Nuggets jerseys, BAPE shoes, Nikes with rainbows on ’em – and saying, “Man I think as straight men we need to take the rainbow back because it’s fresh.” It looks fresh. I just think that because stereotypically gay people got such good like style that they were smart enough to take a fresh-ass logo like the rainbow and say that it’s gonna be theirs. But I was like “Man I think we need to have the rainbow” – the idea of colors , life and colors and stuff, I mean how is that a gay thing? Colors? Having a lot of colors is gay?

Sway: You once were quoted saying that you were inspired in fashion by how gay people dress.