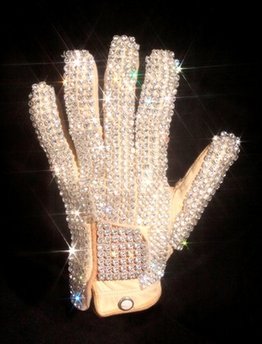 NEW YORK — The shimmering, white glove Michael Jackson wore when he premiered his trademark moonwalk dance in 1983 was auctioned off for $350,000 – plus tax – on Saturday.

Winning bidder Hoffman Ma of Hong Kong will pay $420,000, including taxes and fees, for the rhinestone-studded, modified golf glove Jackson wore on his left hand for his moonwalk on Motown’s 25th anniversary TV special.

The glove was the top item in a collection of Jackson memorabilia on the block at the Hard Rock Cafe in Times Square. Its pre-auction estimate was $40,000 to $60,000.

“It was a fairly good discount,” said Ma, a 36-year-old Jackson fan who bought the pop-music treasure on behalf of the Ponte 16 Resort Hotel in Macau.

As the price of the glove soared, fans roared and squealed – echoing the kind of frenzy that accompanied the late pop star when he toured the world.

“That’s what death brings upon celebrity,” said Brendan Doyle, a college student munching chicken fingers from a plate in his lap. “Jackson’s death was such a tragedy at such a young age that it pushed up prices.”

The pop icon, who died June 25 at 50, had given the glove to Walter “Clyde” Orange, of the singing group the Commodores.

The sale, held by Los Angeles-based Julien’s Auctions, also included a fedora Jackson wore for the moonwalk. It sold for $22,000, against a $2,000 high estimate.

New Yorker Linda Derogene said she was willing to spend up to $5,000 for a material link to the performer she’s idolized all her life, but never got a chance to see in concert.

“I can’t even tell you what it would mean for me. It would be like a dream come true,” she said as she waited to bid on something she could afford.

There was no doubt that Jackson dominated the auction dubbed “Music Icons” – of more than 300 items belonging to stars from Elvis Presley and the Beatles to Mariah Carey. The musicians’ clothing and instruments filled the small Rock Cafe stage, with two giant photos of Jackson on either side and a huge picture of his famed glove at the center.

Buyers paid the gavel price, plus a 20 percent auction house premium for items over $50,000, and 25 percent for those costing less.