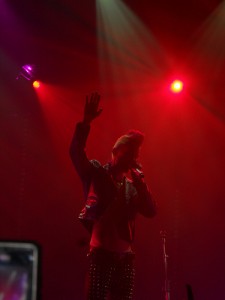 NEW YORK — Front flips over a piano, a Lady Gaga cover and a laser light show were just some of the highlights from the sold-out 30 Seconds to Mars performance at the Roseland Ballroom Wednesday night.

Even before the opening band took the stage, it was evident the headliner had incredibly loyal fans, a majority of whom were rabid Jared Leto aficionados. The members of the crowd may very well have had parental escorts sitting in the bleachers along one side of the general pit area — in other words, it was a youthful set. And their older counterparts were not necessarily prepared for the noise that the first band unleashed.

Street Drum Corps, hailing from Los Angeles, began the performance with three men dressed in strange, post-apocalyptic outfits straight out of The Road. They began to violently bang on trashcans yet produced an infectious rhythm, and shortly thereafter the percussion-only performance morphed into a full band with two drummers. By the end of the set the audience had nearly doubled in size to fill the approximately 3500-person capacity venue and one drummer was making sparks fly by taking a metal grinder to his kit.

The next acts included Neon Trees, which exuded an incredible amount of energy with eccentric front man Tyler Glenn in cowboy-style attire and bassist Brandon Campbell running all over the stage invoking the crowd to direct their energy back at the band, and MuteMath, which got increasingly out of control as the Grammy-nominated band’s 45-minute set progressed.

According to band members, the decision to bring on Neon Trees was a spontaneous one.

“The rumor is that the tour was originally going to be MuteMath and 30 Seconds to Mars, and we have the same booking agent so he said theres this new band looking for a tour, could you make any room? So Jared listened to it and liked it.”

The energy picked up at the end of MuteMath’s set with vocalist Paul Meany bashing the piano keys and doing flips. The band members ended the set by banging on any drum they could see, and received a huge ovation from the crowd. As soon as a curtain went down in front of the stage, indicating 30 Seconds to Mars was on its way, the noise level amplified to an extent not previously heard that evening.

After some introductions by 101.9 WRXP radio host Matt Pinfield promising something special that would not happen anywhere on the rest of the tour, a backlit silhouette of Jared Leto appeared. The band began its performance with the curtain still up, playing “Escape” and “Night of the Hunter,” the first two tracks from its latest release, This Is War. Once the curtain dropped it kicked into “Night of the Hunter” with members of the Street Drum Corps on stage providing additional percussion.

The addition of 3,500 voices singing every word added a new dimension to all of the songs. Leto retained his command of the staege as he made his way to the soundboard area to perform a handful of acoustic songs. Each person in attendance was enthralled with his every move as he strummed through “Hurricane,” “Revenge,” a cover of “Bad Romance,”  and part of “The Kill.”

As Leto constantly interacted with the audience, it seemed he loved his fans as much or more than they loved him. And one could conceivably leave it to 30 Seconds to Mars to leave everyone happy at the end of the night. When the members returned to the stage for “Kings and Queens,” it was clear to all that the band was the work of a special group of people — and that Jared Leto has definitely found his calling.