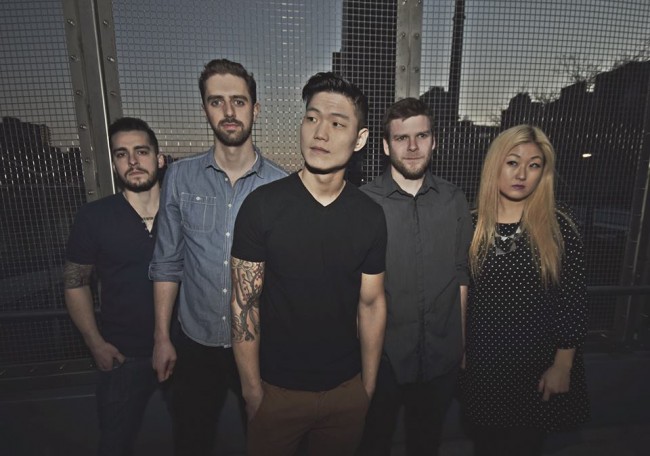 OWEL, an indie band hailing from New Jersey, have been compared to artists ranging from the Beach Boys to Jimmy Eat World. Their new EP Every Good Boy comes out on April 28 via intheclouds. idobi senior writer Catherine Yi sat down with Jay Sakong (guitar/vocals), Jane Park (violin/keys), Ryan Vargas (drums), Seamus O’Connor (guitar), and Nunzio Moudatsos (bass) to discuss the emotional rollercoaster of crowdfunding, touring smart, and playing the Michael Cera equivalent of a show.

How would you describe your sound to somebody who has never heard you before?

Jay: Oh man, I always wrestle with this because people do ask all the time. I would say indie, experimental pop? A little bit of everything.

What are some of your major influences?

Jane: Prior to this, I was playing softer indie folk rock. I’m mainly influenced by artists like Andrew Bird, St. Vincent, and Beach House. I’m classically trained so I have influences from there as well.

Ryan: Nunzio and I used to play hardcore music in a band. It was a challenge to do something different, but also refreshing. It made me change the way I approach the drums and the way I write.

Jay: We all come from hardcore and metal backgrounds, except for Jane.

Seamus: My influences are probably like Death Cab for Cutie. I’m a big Benjamin Gibbard and Dallas Green fan.

Seamus: Benjamin. We like to play poker on Thursdays.

It’s been two years since your self-titled EP. What makes your new EP different?

Jay: Initially, we had no intention of doing the EP. It was almost like a business decision to do an EP instead of a full record. We could pour all of our resources into making the next record and release it with not much notice, or we could put out only a couple songs and generate some traction and buzz that way. This way when we do the next full-length, it gets a bit more attention and is released on a better platform. That being said, whatever direction these songs are going in, they go into them a little bit deeper. The pop songs are poppier, the dark songs are darker.

Jane: During the past two years, we definitely found our way a little better as far as who we are as musicians, too.

Jay: We got less afraid of what not to try, and what to try. I feel like when we started, we definitely had an idea of who we were, but now we’re less scared to go in whatever direction we feel like.

This record was partially crowd-funded through Indiegogo. How was that experience? Was this the first time you tried it?

Jay: Yeah, it was a complete ego booster [laughs]. It was awesome. I never would have thought we could have raised that money from people just wanting to help us. Nunzio was in a band that’s done that, but the rest of us haven’t ever done that, so I didn’t really know what to expect.

Jane: It was amazing to see people from different countries supporting us—it opened our eyes. Like, wow, we have listeners far away that we had no idea could help and wanted to help.

Do you think you’d try out that model again?

Jane: [Laughs] It was all pretty stressful.

Ryan: I think it was a one-and-done kinda thing. It was a cool experience, but I think in the future we want to plan better and control our own spending money instead of using Indiegogo. It’s tough because it is really stressful. If you don’t hit that mark then you have to come up with that money and you never know if you’re going to.

Jay: And also, how much can you really ask of people?

Seamus: How many times can you ask someone for money?

Jay: As much as it was an ego booster, I feel like if we do it again, it will be an ego shatterer.

You guys have a lot of different textures and layers in your music. How do you translate all of this into your live show?

Jay: Obviously we can’t have a full orchestra or choir on stage with us, but we make up for that with a little extra gain on the amps and some energy and presence. I’ve heard that the songs sound more rock live.

Jay: But, we do have a string player and keys live. That really helps.

Jane: We do try to put on an engaging live show. We have lights that we program ourselves.

You guys are playing a free show at the end of this month as part of the American Songbook series. It looks like a special seated show?

Jay: Yeah, it’s gonna be super awkward, you should come!

Jane: Somehow we got contacted by the American Songbook series that’s run by the Lincoln Center folks. We were one of three that were invited to perform. It basically bewildered all of us because we were like how the hell were we chosen, but we went with it. That kind of thing doesn’t come along every day.

Ryan: I thought it was a joke at first.

Jay: [Laughs] Yeah, I totally thought it was a scam. They were like, “You’re going to play for an hour and a half at the Lincoln Center,” and I was like, “Really?”

Is it really big?

Jane: The atrium that we’re playing holds about 300 people…

Jay: So it’s not really that big.

Jane: And there’s going to be limited seating so some people will be sitting, some people standing. It might be awkward.

Jay: Oh, it’s most definitely going to be awkward. It’s going to be like the Michael Cera of all of our shows.

Jane: We’re supposed to be promoting this!

Jay: Oh, we’re supposed to be promoting this?

Everyone: It’s going to be awesome!!

Most of your live performances have usually been one-off shows so far. Can we expect any touring in the future?

Jane: We really want to.

Jay: We’ve done weekend tours around our area, but yeah, absolutely you can expect some tours coming up. Yes. I’m going to go with a hard yes.

Nunzio: That’s definitely something all of us want to do. It’s just one of those things where the wrong opportunity can really screw you. Like if you’re on something where you’re just hemorrhaging money or playing some small bar in Kentucky on a Tuesday night where there’s like 5 people there. It’d have to be the perfect opportunity, but it’s something that we’re all waiting for.

Jay: I’ve been in bands where you’re hitting the road and you have this romantic notion of what “hitting the road” is. No show is a bad show, but when you’re paying money to get there, paying money to stay and eat, and playing for like four or five people, it just doesn’t logistically make sense. So we’re making sure of it this time.

Yeah, I’ve been to some of those shows. They’re tough.

Nunzio: Even if you make two fans at a show it’s a victory, but you can also make two fans sending your SoundCloud link to someone online for a lot less money and less work. It’s different nowadays.

Jay: But it’s still a romantic notion that I hold onto and I still do want to hit the road. I just want to make sure the tour is worth it.

Jane: I’ve never been on tour and I’m so ready, even for the ugly-ish stuff. Like I just want to go.

Jane: I know, and then I’ll be grizzled and bitter.