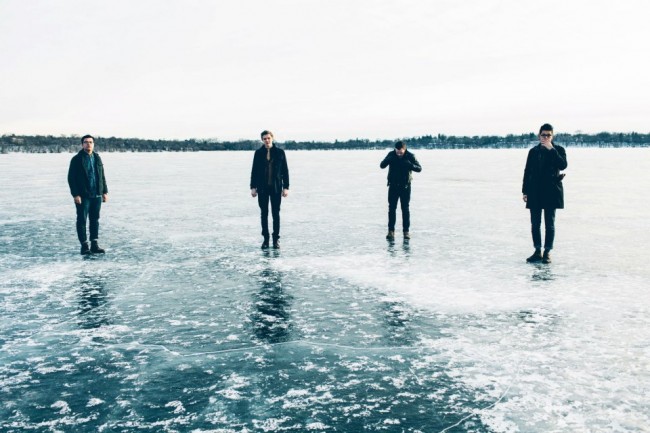 We’re kicking off the week with the premiere of Author’s new single “To Dream,” and we caught up with vocalist/guitarist Trevor Bartlett to talk about the song and what the immediate future holds for the Minneapolis band. Listen to the song here and get to the know the band a little below!

So you guys headed back down to Florida to record this single with Aaron Marsh, who also recorded your EP. That’s a little over 1,500 miles. What is it about the way that you guys work together that makes it so critical for him to be a part of the process, even when it’s just one song?

Well actually we got lucky – this time around our tour with Polyenso ended in Florida. As far as the process goes we just seem to click with Aaron Marsh. We will typically come to him with a near complete song and he always has a fresh mind on things and definitely challenges us in our thought process, causing us to rewrite parts or just perfect what we had already written.

What was it about the song that made it so important to get out there before the rest of the full-length?

It was important for us as we released our EP a year ago this May. We wanted to keep fans up to date with where our music is heading as well as catch new interest while we promote an Indiegogo campaign later this summer to help fund our full-length record.

You’ll be heading back into the studio in January to record that. What will the next seven months leading up to that consist of for you guys?

We are doing a lot of regional midwest touring while writing and demoing out new songs for the record. We are in the works of booking a west coast tour for the month of September with our friends from Texas called The Hawks And The Found.

You also mentioned doing a campaign for your new album, and crowdsourcing is always interesting because there are always such mixed opinions on it. What is it that makes crowdsourcing the right choice for you guys as a band?

We are deciding on Indiegogo this time because we want to be real about our cost of the full-to length as well as let our fans and friends know we are working for it. This LP needs over $10,000 to become a reality and with Indiegogo you keep all funds and whatever is not met the band will meet. There is no “we can’t make it without your money” because we feel that’s lazy of a group; we simply want to offer an opportunity to preorder limited edition pieces as well as become an actual part of the project.

Obviously the first release is a really big part of a band’s learning process. What are some things you learned from People Are Alike All Over that you’re hoping to bring to this next record?

We definitely learned a ton with the first release – to do’s and not to do’s. We sold over 1200 copies in a year independently and with no distribution. We did a strict “pay what you feel” motto for sales of the record, which was a huge success. This full-length is no different. Once it’s released it will be available for download for name your price. Our music is of such importance to us that we feel it needs to be given to everyone no matter what the amount.