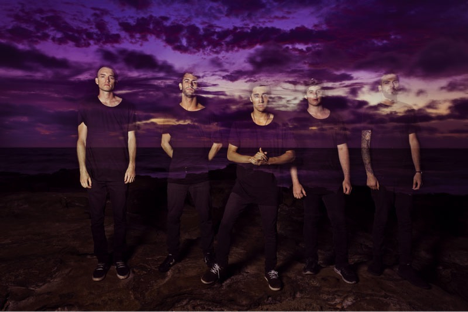 2013 was an insane year for Northlane. They released their sophomore album, Singularity, in March in their home country of Australia and in November here in the states to glorifying reviews. The Sydney-based band have returned home after a full US run with Veil Of Maya only to be coming back this March to have their own headlining run, along with select support dates on the American Dream Tour with Bring Me The Horizon. idobi writer Alex Rudisill caught up with bassist Alex Milovic to discuss the band’s current happenings.

What’s been your biggest challenge being an Australian band in the United States?

There are a lot of bands that tour the United States and are from the United States, I think the biggest challenge for us being from Australia is appealing to American fans. With such a vast amount of American bands, we really have to make ourselves stand out in a crowd, do something different that will captivate the audience and listeners.

You guys have toured with a variety of bands that wouldn’t necessarily tour together. What genre would you categorize Northlane as?

It’s hard to categorize what genre we are as we have a wide range of influences from bands like Coldplay, Linkin Park, Underoath, Deftones, Architects and more. Northlane definitely has its distinctive sound, but as a genre I can’t really put a pin on it.

Did you expect that strong of a reaction from the audiences on this past tour with Veil of Maya? Does the fans familiarness with your music continue to surprise you?

We really didn’t know what to expect going into the Veil Of Maya tour. We knew we had a fan base in the U.S. because of our social networking sites, but the reactions and familiarness with our music was overwhelming!

What is the concept behind Singularity and its cover art?

There are a lot of negative messages in today’s society and we wanted to change that, we wanted to send out a positive message to our fans, something that you can take a hold of and relate to and that really sticks with the listener. With the artwork, we tried to portray that with the man and woman coming together to form a singularity, that sort of change in reality.

You guys ended 2013 on a high note with the release of Singularity and a handful of tours. What was your biggest highlight?

Playing at Sydney Soundwave. For us, that was a music festival we all grew up going to and aspiring to do what the artists at Soundwave were doing. When we got the chance to do that in our home city, it was amazing. Not to mention the reaction we had surpassed all of our expectations.

What can you expect from this upcoming tour with Bring Me The Horizon?

Big crowds!! Most of the shows we are playing have already sold out but a part from that hopefully some new faces that wouldn’t normally come to watch our band. Bring Me The Horizon are a different band to us but hopefully their fans will like us too.

How do you spend your time off the road?

We’re on the road so much so when I’m at home, I really just spend time with my girlfriend and friends that I haven’t seen. Writing music in the downtime, playing video games, or going on adventure’s and road trips as well!

At this current time we aren’t too sure. We are still touring for the Singularity cycle and hope to push that to the end of the year, so who knows!

What band are you hoping or expecting will be the next ‘big thing’?

A melodic hardcore band from Sydney called Endless Heights. They’re really pushing the boundaries and stepping outside of the norm, not to mention they are a great bunch of guys that work there ass’s off.