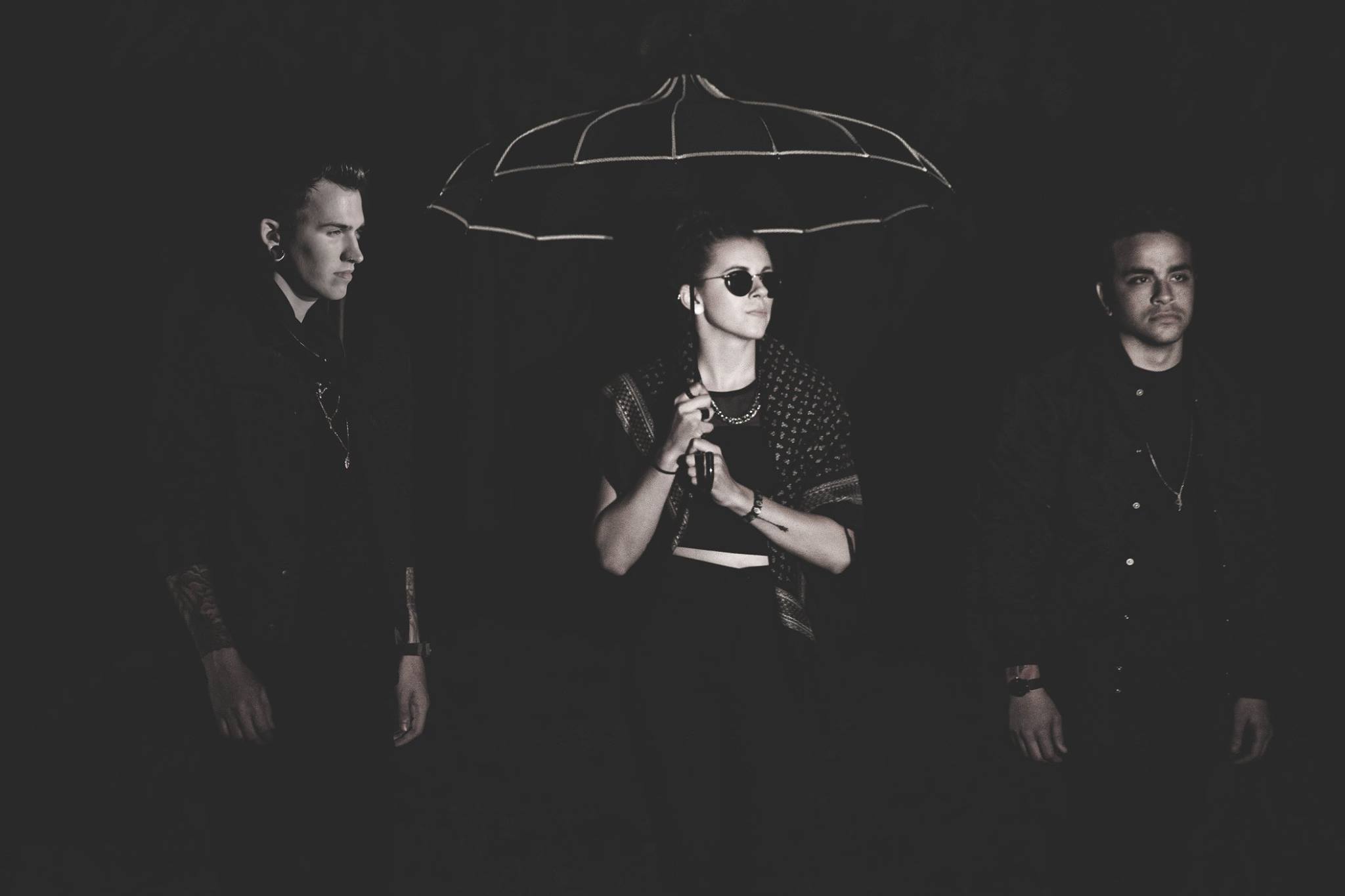 If you’re on the search for one of the most exciting up-and-coming bands out there, look no further than Massachusetts natives PVRIS. Newly signed to Rise Records, the band recently made their official Warped Tour debut with a two-week run; idobi managing editor Eleanor Grace caught up with frontwoman Lynn Gunn towards the beginning of their stay on the tour to talk about their upcoming debut full-length, musical influences, working with Rise, and more.

It’s a really exciting time to be in PVRIS. Everything, especially the past couple months, has just been nonstop great news for you guys. You just announced your signing to Rise Records, which is huge; you’ve got your new record coming out in the fall through them; you just put out a brand new song; and now you’re on Warped Tour.

Everything is happening so fast.

What’s been the most surreal part of it so far?

Just like…having it happen and experiencing it. Ever since I was in middle school I was like, “I wanna do that stuff!” Now we’re finally here and I’m like, “Woah…snapshot real quick. Freeze time for a second – this is crazy.”

Has there been one particular moment where you’ve had to pinch yourself and realize you’re not dreaming?

We hopped on two days ago, and [our first day] we had the worst set ever. We couldn’t set up everything in time and nothing went right and it was a very bad day. And yesterday, everything worked perfectly, and kids were there singing and jumping and everything, and I didn’t even know people knew about us in Indianapolis. So I was like, “This is crazy.” We haven’t experienced that yet, so we were all just like, “What is going on?”

What was it about signing to Rise that really made you feel like it was the right fit for you guys?

We were actually supposed to sign to a different label, and…actually, I don’t know if I can even tell this story. But [Rise] has a huge fanbase. They let the bands do whatever they want. They let you have as much creative input –

Wait, you mean they didn’t force you to make a pop song for the new single? I thought kids in YouTube comments knew everything!

[laughs] Exactly! They were supportive of it. We actually – when we sent over the first mixes to the songs on the record, they were like, “Woah!” They weren’t expecting it. But they have been super open about it and they’ve been doing even more than we were expecting they would be doing. Like, they’re pushing it to a lot more of a broad audience, so it’s been crazy. They’ve let us do whatever we want and just been going above and beyond for us. So that stuff is the ultimate thing with them. They really believe in what we’re doing.

What inspired you guys to take your music in a different direction stylistically?

Since we did our last EP, I learned to use Reason, which is electronic programming [software]. And me and Blake [Harnage], who produced the record, we’d actually been in touch for quite a while – maybe three or four years back – and he’s always helped me out with programming and electronic stuff. We had so many songs demoed out on my computer, and some of them were strictly rock songs – which I thought we were just gonna do that – and then a lot of them were really electronic/pop stuff. And when we went through the demos to pick what we wanted to put on the record, we were like, “You know what? We should just do all these crazy pop ones, cause they’re better songs.” So we ended up going with those, and then we just kind of combined our brains together. He’s amazing to work with and his brain is insane, so just that combination and then – it was kind of planned to be that way anyway, like, that’s kind of the direction we wanted to go in anyway. And he definitely helped us being like, “Yo, you can do this. Don’t be afraid of people shitting on you for it.” He was super supportive of it.

Well, based on the response to the new song, I would say it’s working out for you guys.

Yeah! We’re super surprised cause like, nothing against the Rise community, but it’s typically heavier – a lot of kids will be like, “What the fuck is this?” [laughs] And it’s not like that. A lot of comments were like, “Oh, I don’t usually like this stuff, but this is cool.” So it’s weird that we’re winning over a bunch of kids that didn’t think they would like this kind of stuff.

Yeah, absolutely! I think there’s something for everybody, so it’s cool.

You mentioned working with Blake, who, for anyone who’s not familiar, is in Versa (formerly VersaEmerge), and you guys also have Matty from A Loss For Words on your management team. Even the first song that we heard from you guys was a collaboration with Love, Robot. What is it about working with other musicians that you guys find yourselves drawn to?

You just – I don’t know, you find different connections between everybody. You feed off their energy and they feed off yours, and it’s this kind of brain wave that I feel like all musicians share somehow. And it’s just super, super awesome to share that with somebody. So I think that’s why. I don’t know, I just like vibing with other musicians, so that’s ultimately why. And I think music’s such a huge connection through everybody.

You guys are the first female-fronted band on Rise Records. It also seems like the hot topic around Warped recently has been the small amount of female representation in the bands on the tour – something like 6%. How does that feel for you?

Do you feel like Warped has a responsibility to actively seek out more bands with girls? That seems to be what everyone is debating right now.

I don’t know. I feel like they’re certainly welcoming to girls and they’re absolutely supportive of them. Kevin Lyman backs all the female bands so hard, so I don’t think there’s any sexism or anything going on. I think people are full of shit and just need something to complain about. [laughs]

Well, good! To hear that from someone who is a female on the tour, it definitely holds weight.

Everybody likes each other. It’s a big family.

I know you’ve only been on Warped a few days, but what’s been the coolest part of it for you so far?

Who are you most excited to watch over the summer?

Bad Rabbits. They were watching us yesterday and I was like, “Oh no, I gotta do really well.” I was like freaking out.

Well, the set went well, so maybe they were your good luck charm!

Yeah! So I think they liked it. They’re pretty good friends with Matty too, so hopefully they dig it. But yeah, I’m mostly excited to see them. I haven’t caught their full set yet, cause I’ve always been like, running around doing stupid shit [laughs]. It’s hectic – I never expected it to be this hectic.

Going back to your musical style, I’ve always felt like you guys have a really interesting blend of light and dark musical elements. Like, your music can get pretty heavy at times, but it has so much pop sensibility as well. Talk a little about that dichotomy.

I like really pretty-sounding things and very ear-pleasing things, but I have a lot of angst and anger in me, so I kind of just combine those two together. My brain can get kind of dark and weird, so bringing that with the whole, “I like hearing pretty things and making things that sound nice,” bringing those together makes it what it is. Angst combined with “I like pretty things.” So it’s a nice balance.

Where were you drawing inspiration from for this new record?

It’s very haunting-themed. [It] mentions ghosts and spirits a lot and kind of, as you can hear from “St. Patrick”, a little bit of religious references – but not necessarily saying I’m religious. A lot of spiritual, supernatural kinda vibe to it, just cause I’ve always been into that stuff. When I was doing the lyrics for the record, I was very inspired at the time – it was like October, around there, so I was very into ghosts and everything. I’m always into that anyway, but yeah, I was very inspired by spirits and all that crazy shit. So I think I kinda just put that into the lyrics and all the meanings behind everything. We have a song called “My House” that’s about a poltergeist but it’s also a metaphor for a person, being like, “Go away.” [laughs]

This is your debut full-length, and it’s the first release you’re doing on a big label. What are you guys hoping to accomplish with this record?