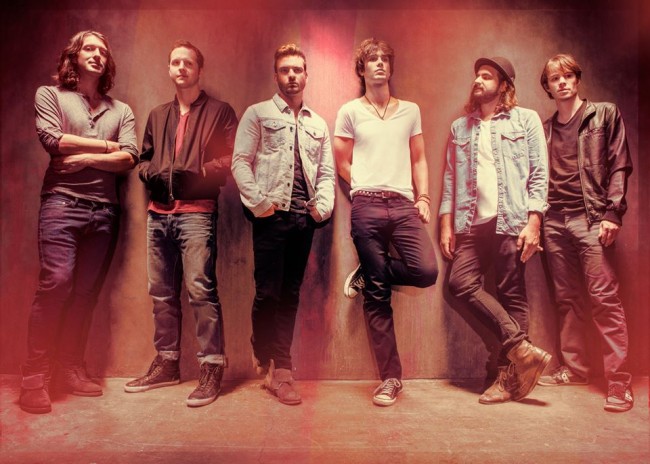 Indie pop band Gentlemen Hall are gearing up to release their major label debut this year and have just started their current west coast tour with Basic Vacation. idobi senior writer Catherine Yi caught up with the band right before they hit the road to discuss opening for Third Eye Blind, having a flute player in the band,  and how their hipster credibility held up in Brooklyn.

Check out the idobi Instagram tomorrow for a Gentlemen Hall takeover!

You guys are about to kick off your spring tour with Basic Vacation. Where are you guys most excited to play?

Cobi: The Satellite [in LA].

Seth: Satellite on Monday night, it’s going down. We’re playing with Dwntwn, Basic Vacation, Jhameel, and Y Luv. It’s an awesome bill and the second show of this tour, but it’s also our kick off from LA, which is somewhere we know and love.

Do you guys have anything special planned for the shows this time around?

Seth: Yeah, we’ve been working hard, writing a lot, recording new songs, and we’re gonna play a lot of new material. We’re really excited to play it so that brings a whole energy, and then we also worked in some new exciting things with lights into our show for the first time so we’re gonna have that set up and it should be an experience.

Very nice. You guys have all the pyrotechnics and everything.

Seth: [Laughs] Yeah, once the lights work, the pyro’s next.

Your last tour was with Third Eye Blind in November. How was it touring with such a legendary band?

Cobi: It was awesome getting to play those types of venues. They were playing amazing theaters and House of Blues and stuff like that. Their fans were a lot of fun to play for. They were gettin’ down and the band was really nice to us. They were always sharing knowledge, talking about gear, talking about what it’s like to perform, and how it’s been for them to just be in the business as long as they’ve been. It was a huge learning experience and it was really awesome.

You guys have been garnering buzz for years but are only now getting ready to release your debut full-length. Why the long wait?

Cobi: Technically we’ve released a few different records, like EP’s and we released one full-length kinda soft back in 2010. You’ll never be able to find that anymore but…why do we keep pulling our music down? I don’t know…I never planned to.

Seth: People keep on telling us, so we do.

Bradford: Well, we keep developing, like our first music was a little different from what it is now.

Bradford: We were just like a get wasted, party band [laughs]. And then we decided to tighten it up a bit.

Seth: We were a baby band just wanting to have fun and play venues around Boston and parties, but we just kept writing and our influences grew a lot. Phil was listening to a playlist of like Passion Pit and all these amazing bands. Our influences as a band grew on top of what we already had and we just started writing what was more relevant. For the first record, we went to Cleveland and we recorded at Ante Up Studios. We made a full-length record and actually “Sail into the Sun” was one of those eleven songs, but that was like four years ago now. I mean, we just signed with Island Records and we’re working with them on bringing the freshest record of material to people’s ears.

That’s really cool being on such a huge label. How did that signing come about?

Phil: It was a long time coming. They had been watching us for at least a couple years, but then “Sail into the Sun” blew up when it got placed in a couple commercials and that’s when a lot of things really set into motion. We got our current management and then the label came, like a lot of things just happened.

Seth: Yeah, it helped move things forward and fast-paced. They had been sending scouts out to our shows for like four years at small rock clubs. Sometimes we wouldn’t even meet them, but they had their eyes on us. We just like the way they operate as a label. They listen to our music, they care, they talk to us about our songs, and we felt comfortable so we’re excited to bring our next record with them.

You guys were just recording in Brooklyn. How did that experience go?

Seth: It was an amazing, new experience. Brooklyn’s inspiring.

Cobi: We were working with a producer named Alex Haldi. He mixed our new single, “All Our Love,” and we liked his mix so much we wanted to go in the studio and work with him on one of our new tracks and see how it went. And it was really fun so we’re gonna release the song soon, I hope.

Seth: Yeah, we just finished it, but we feel really strong about the song. Alex has worked with Passion Pit, like they did “Take a Walk” in that same room, and Magic Man, who we love and are good friends with. So we were just like, “Let’s see what happens,” and I think we came out of that studio with a really new hot song, so now we just need to find someone for the video side.

So have you guys finished recording the full-length already or you’re still in the middle of that?

Cobi: I mean, the full-length is gonna be compiled music from the last two years probably. We’ve been in the studio a lot the last few years and we have a lot of music that’s in the vault waiting to be released, so I’d say the majority of the record is done already. It just depends on when Island wants to release the next single, what single that is, and what other songs go with that.

Bradford: We have way more than enough material for a full-length.

Did recording in Brooklyn make you feel much more hipster?

Bradford: It made us feel less hipster.

Seth: When you’re like in Iowa on tour and you’re the only ones wearing skinny jeans, that’s when you feel super hipster. In Brooklyn, you’re like, “I got none.”

I mean, you guys have a flute player in the band which is –

Exactly, not very many bands do that.

Seth: [laughs] Nerdy as it gets.

Do you ever get any weird reactions when you guys go on stage and the crowd notices there’s a flute player?

Seth: Flute player here speaking – it’s weird, but it’s fun to put people in that position. We’ve been doing this for five years. We’re confident and we love presenting the whole Gentlemen Hall thing with the flute, so we just go out there. Especially with the Third Eye Blind tour, we’re like, “Well, what are they gonna think,” and next thing you know, people are loving it. They’ll come out after the show and be like, “I’ve never seen the flute like that, it’s cool.” But I’m sure some people can be like, “What. What is going on.”

It’s like when Yellowcard first got famous with a violin in it.

Seth: Yeah, it separates us too, having unique instruments. For a lot of people, it gets them really excited just to see something new, you know, something different.

How is it, working the flute into a band setting?

Seth: We work at it every single day.

Cobi: There’s a lot of different ways to do it. We try every way.

Seth: Brad and I were in a side studio while we were in Brooklyn, working on some flute ideas in this new song. We just recorded a bunch of stuff, like cool melodies, and we felt like it’s cool, but it’s not the new stuff. It’s not what’s hot. The next thing you know, we’re in Ableton chopping up flutes and making like a flute arpeggiator in the song. We’re like scientists, chopping up instruments and doing new things with them.

Bradford: Yeah, there’s some classic flute things that we do and then we try to find new stuff.

Seth: We work together on it though.

Bradford: Ableton makes it pretty easy to do.

What do you guys have planned for the rest of the year?

Cobi: SXSW hopefully. We’re trying to make it down to that in March. This tour’s gonna be most of February so after that it’s like a big question mark.

Bradford: And we’ve got a music video coming out, the “All Our Love” video.

Seth: We were up in Montreal making this video and it was fun. It’s interesting, they’re all like these really artistic French Canadian people. Talk about not feeling like a hipster there too – it’s like super artsy. They really pushed the limits and we made a weird video.

Yeah, I saw the teaser with the guy wearing a horse head.

Cobi: It gets much weirder than that.

Seth: It’s guaranteed to make you laugh every time but I mean The AV Club’s gonna premiere it and that’s soon.

Seth: Oh my god! Well, plenty of touring. I mean there’s this record we want to get out to everybody soon. And we’re just gonna keep writing and being a band and trying to push the limits.