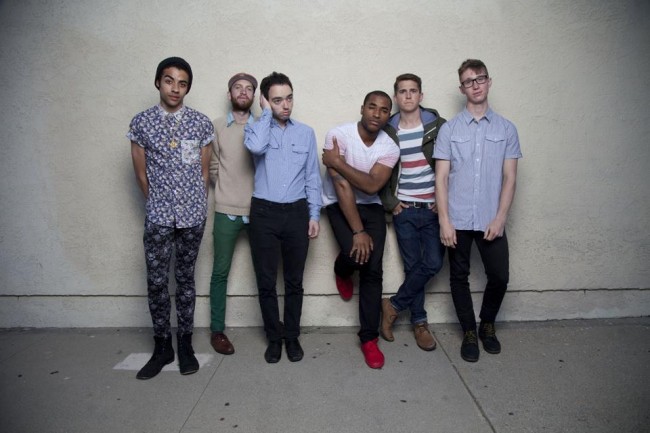 After signing to Hopeless Records last year, hip hop outfit Air Dubai have been working non-stop. They just put out their first release on Hopeless, the  Warning  EP, and are currently out on the Noise Tour with Marianas Trench. idobi writer Catherine Yi caught up with vocalist Julian Thomas and bassist Taylor Tait at the tour’s Los Angeles stop to discuss the new EP, being signed to an alternative rock label, and their love of Justin Bieber.

Warning, your new EP and first Hopeless release, literally just came out yesterday. How has the response been so far?

Taylor: Just being able to see our album out on iTunes and watch it grow a little bit.

Julian: Yeah, it’s been climbing up the charts a little bit yesterday and that was really cool to see.

Taylor: It’s nice to able to finally put something out – something we’re proud of.

What would you say your favorite song off the EP is?

Julian: Mine personally is the last one, “Dance With The Devil.” I think it was the last one we wrote, and I wrote it in-studio, and I just think it turned out really cool.

Taylor: I like “Dance With The Devil” too, or “All Day.” It’s a nice, good summertime song.

Can you talk a little bit more about the recording process and how it differed from previous releases?

Julian: Previously, we spent a lot of time doing pre-production like writing at home or writing wherever. But with the last EP we did most of the writing in the studio, which was kind of different for us, but I think it ultimately worked out for the better. I think we really strived a lot more when we were in the moment, recording and writing at the same place.

Taylor: Yeah, when we’re all together in the same room it makes things a lot easier for sure.

How long did the EP take to record?

Julian: That’s tough to say. We visited the same studio in Austin three different times to record about ten or eleven songs over the course of like a year and a half. And five of those songs got on the EP so they’re all kind of scattered but I would say from like spring 2011 until summer of last year.

I remember you guys had a full-length coming up, called Be Calm, and then something happened with the label signing and the album was never released. Do you still have any plans for that album?

Julian: It’s still going to be released. We’re not totally sure when yet. We’re thinking in the fall, but right now we’re just really focusing on pushing the EP and the single. All the songs came from what was going to be Be Calm so we just wanted to give people a little taste before we actually released the full-length.

Your lead single “Warning” features Patricia Lynn on it. How did that collaboration come about?

Julian: It was kinda random actually. We record everything in Austin so our producer’s based in Austin, and when we went down there he wanted specifically to have a feature on one of our songs because he thought that would be something different for us. He knew a singer in a band that was in Austin and she just came in, wrote the hook in like ten minutes, and just really laid it out and we were like, “Wow, this is awesome.” So we just wanted to lead with it and it’s been really good so far.

What would you say your biggest musical influences are?

Julian: I listen to a lot of LCD Soundsystem, a lot of Phoenix, and also like some A$AP Rocky…

Taylor: It’s definitely a melting pot of different genres that go through our ears.

Julian: Yeah, we’re all over the place.

Taylor: It’s definitely just what kind of feelings you evoke. I love all different types of music.

Speaking of a melting pot of genres, how is it being signed to a label more known for punk rock and pop punk bands?

Julian: I think it’s awesome, personally, just to be able to be sort of the black sheep of the label and get a little bit different treatment than everyone else gets. I feel like everyone else on the label gets kinda the same agenda and they had to start over and do something fresh with us, so I think it’s been really good so far.

Taylor: Yeah, it’s been really accommodating too at the label. They’re great guys and all the bands are really great. We’ve toured with a couple, and it’s been really cool to bond with Hopeless as well.

Julian: Because like, it’s a new thing for them to sign someone who’s hip hop-based and it’s been a learning experience for both parties.

Can you tell us a little more about how you ended up with Hopeless?

Taylor: So the first show we ever played in Los Angeles was at the Echo in Silver Lake. That show came about randomly and we played it, and some people from Hopeless called our A&R’s and were like, “You gotta check out this band,” and then we got the video rolling and the relationship grew so it was good.

Julian: It was definitely very organic, the way it happened. It was just, come to LA, play a show and get signed [laughs].

Taylor: Yeah, it was nice.

So you guys just started The Noise Tour with Marianas Trench. How has it been so far?

Julian: It’s been really awesome. The audience of the tour is a little bit different from what we’re used to, but it’s been great to branch out and do something a little different.

Taylor: It’s great. Journey’s has been awesome with us. We’ve definitely gotten real close with them and all the bands are totally supportive of each other and it’s really sweet to be spending this much time on tour.

You say the audience is a little bit different. How has the crowd response been?

Julian: It’s been pretty good, I think. I would say the majority of the people here at the shows aren’t necessarily here to see us, but you know at the end of the night we definitely sell a lot of merch and we meet a lot of fans, who are new fans just from hearing us that night.

Taylor: It’s always good because a lot of these kids aren’t exposed to our type of genre or whatever we might have to put out so it helps both parties you know. We get a new following of people that we wouldn’t normally appeal to, but then they listen to us, which opens them up to something new.

What do you think your dream tour package would be?

Julian: A lot of Miguel, a lot of Kendrick Lamar, a lot of those kinds of artists. I think we all really look up to them.

Julian: Just the four of us.

Taylor: Just us right at the top [laughs].

So a Bieber and Kendrick Lamar tour?

When you guys are on tour what do you like do on your days off?

Taylor: Yeah, I mean we get to see a lot of friends that we don’t normally get to see since they’ve moved from where we originally met them. And I think just reconnecting with people and making connections as well with other people, new people, is nice.

So with the EP out, what plans do you have for the rest of the year?

Alright, any last words to say?

Taylor: Until next time.

Julian: Keep it funky, keep it real, keep it fresh.

Taylor: [laughs] Those are our last words.