Internet radio is not as big as terrestrial radio. In fact, it takes the combined audience of every station on shoutcast.com to equal the listener numbers KROQ, the nation’s top Rock station. That’s not to say that some station owners do not one day dream of becoming as large as their traditional terrestrial counterparts. However, the royalty rates being demanded by the RIAA will not only put many internet radio stations out of business, but will also ensure that internet radio will never, ever become that large. The process in which internet radio rates have been presented to the public is a page out of Marketing 101. For the same reasons that retailers price their products at $1.99, the Copyright Royalty Board’s proposal of $0.0007 per song per listener, to be collected by Soundexchange, looks perfectly reasonable. That’s 7/100 of a penny a song. Who could possibly object to that? But it’s time we look at the real numbers. What does it mean to internet radio stations today, and what will it mean when internet radio becomes more mainstream? idobi Radio has been in operation since 1999. We’re a niche station, straddling that gray area between indie rock and mainstream pop. We spun Green Day and Blink 182. We pushed Good Charlotte and Simple Plan; Fall Out Boy and My Chemical Romance — and watched our numbers rise as they became multi-platinum success. We eagerly devour new music, and hope the same thing happens again with Houston Calls and Quietdrive and many of the other bands we support. I hope that idobi Radio will become as big as KROQ one day. However, if the current royalty rates are allowed to stand, it will never happen. Why? Let’s do the math. 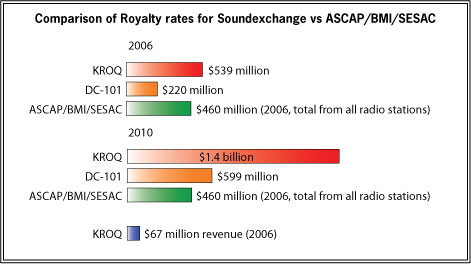 WWDC (DC-101) and KROQ have 4.5 million and 11 million listeners respectively. If we apply royalty rates of $.0007 per song per listeners to them, they would be required to pay $220 million and $539 million in royalties last year, and $599 million and $1.46 billion in 2010. KROQ, by the way, had revenue of $67 million last year. I hope an internet radio station can become as large as KROQ one day. But if the most successful rock radio station in the country can not afford these rates now, how can any internet radio station possibly compete? Internet radio stations are not looking for a free ride. The Internet Radio Equality Act in the House and Senate would set the royalty rates to 7.5% of the station’s revenue — the same rates applied to satellite radio. Internet radio stations are also not getting a free ride now. They pay performance royalties to ASCAP, BMI, and SESAC, as do traditional radio stations, bars, restaurants, and any place you hear public performance of music. But compare Soundexchange royalties to what’s collected by these performance agency, and you understand how insane these rates are. ASCAP, BMI, and SESAC collected a combined $460 million in royalties from internet, terrestrial, and satellite radio stations last year. Total. From everyone. However, the RIAA expects to collect to that much in royalties from a single station the size of KROQ. In 2010, they would expect to collect, from a single internet radio station the size of KROQ, $1.4 billion – three times what every station in the country currently pays ASCAP, BMI, and SESAC. These rates are the definition of preposterous. They are anti-competitive, and they must be stopped. Visit savenetradio.org, and call your senators and congressman in support of the Internet Radio Equality Act. PDF Version