The Agonist  steps  their way from third to first in three weeks, a feat no other band has achieved in approximately six months of publishing a playlist. Eye Of Providence marks the debut of Vicky Psarakis who joined The Agonist after Alissa White-Gluz replaced Angela Gossow in Arch Enemy.  The moral of this story?  These bands fill a niche within a niche genre. It would seem sexist if not for the lack of metal bands who have replaced male singers with women (Arch Enemy  is one).

We know Howl’s audience is young enough that the bulk of Blind Guardian’s music was written well before most of our fans a.) were born or b.) first heard of metal. On the other hand, DragonForce was well-received in our rotation in 2014. This seems as good a time as any to add historical perspective to Howl’s power metal inventory.

Cancer Bats is back on the featured playlist now that Searching For Zero is finally out.  You have already heard three songs in our regular rotation because we are all over new music like butter on bread.  OK, fine we were a month behind Blind Guardian’s Beyond The Red Mirror but Cancer Bats  is one of six bands in this lineup who had songs on Howl two or more weeks prior to  album release (Stick To Your Guns, Torche, Psycroptic, Feed Her To The Sharks and Rotting Out are the others).

Eternal Enemies came out in 2014 but we’re excited about Southbysowhat May 20th-22nd and Emmure is playing day 3. Expect to see more bands from that fest on our featured playlist  in  coming months. 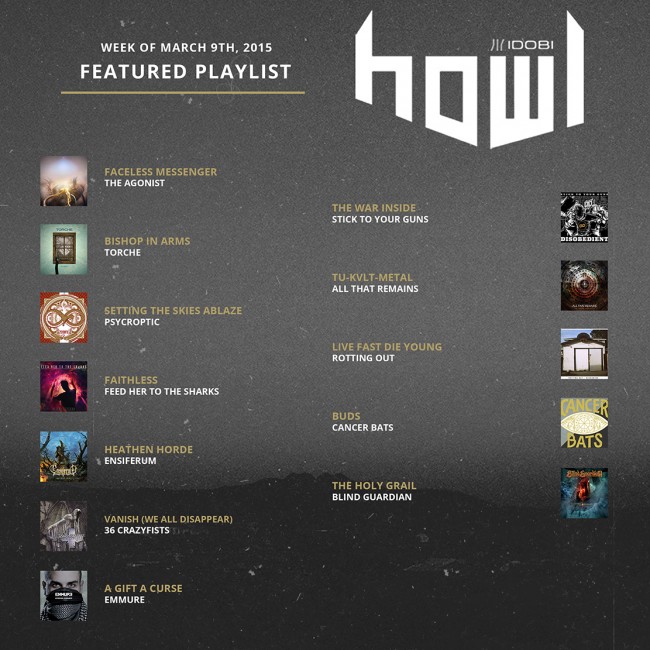 Tags: 36 Crazyfists, All That Remains, Blind Guardian, Cancer Bats, emmure, Ensiferum, Feed Her To The Sharks, Psycroptic, Rotting Out, stick to your guns, The Agonist, Torche