We try to keep our featured tracks as hype-free as possible. Our playlist should  reflect the very best (and ideally, newest) metal and hardcore out there right now.  That’s why we waited for Stick To Your Guns‘ Disobedient release week to pass before we revisited the album for consideration at the top of our featured tracks. Sure enough, this album strikes the critical balance between fast hardcore and clean vocals that every melodic hardcore or metal band ultimately tries to achieve. Also worth praise is the minimal presence of samples that once preceded many tracks in older Stick To Your Guns albums. For the most part,  Disobedient is one killer track right into the next.

We also spent extra time considering Hate for our top tracks.  Initially, we thought Crusade Zero might be too crazy to share space on a graphic with names like Erra, 36 Crazyfists and Gideon. Thing is, we know you love Behemoth, another fantastic death metal band from Poland who is also extra heavy compared to some of those other names. Hate has an extensive history, still rocking almost 20 years after their first release in 1996. They have earned this spot among our featured songs.

This is also the first week without Napalm Death on the Featured Playlist since the release of Apex Predator –  Easy Meat.  You can expect to see them again, hopefully soon.

Psycroptic’s self-titled album is due next week, we are excited enough to consider a plane ticket to Australia just for the release, since Australia basically exists in the future.

Hey we’re experts in metal and hardcore, not time zones. 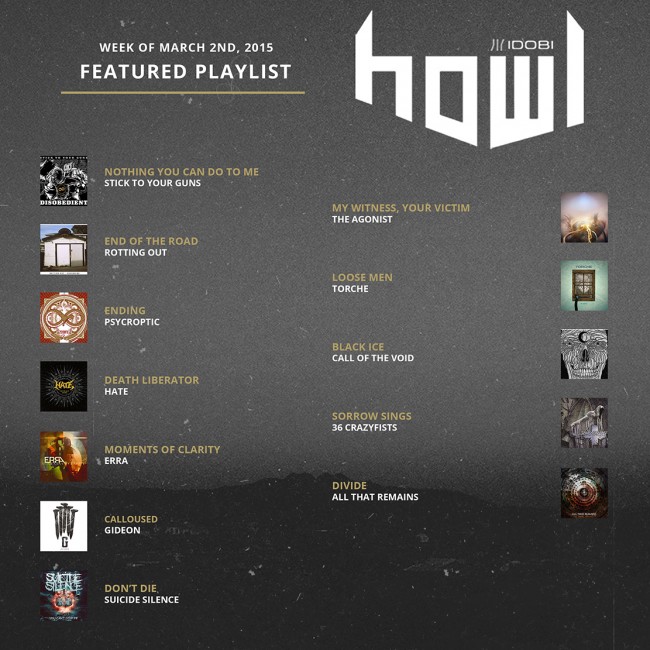 Tags: 36 Crazyfists, All That Remains, Call of the void, Erra, Gideon, Hate, Psycroptic, Rotting Out, stick to your guns, suicide silence, The Agonist, Torche