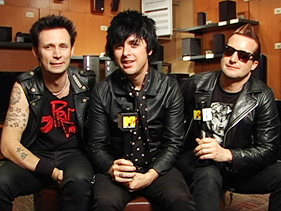 NEW YORK – You can forgive some of the Green Day fans packed inside a Manhattan Best Buy if they got a little bit pushy. After all, some of them had been waiting in line for nearly 30 hours for this moment.

On May 15th, 500 lucky GD fanatics who had spent the night camping out on the sidewalk finally got a chance to see their idols at a raucous meet-and-greet filled with tears, screams and lots of hugs. There were autographs signed, pictures snapped and terrified-looking Best Buy employees trying their very, uh, best to keep order.

Amid all the screaming and flashing, seated at a card table with a bowl of candy and a pile of Sharpies and flanked by a massive display of their just-released 21st Century Breakdown album were the members of Green Day themselves. But rather than panic, they kept cool. After all, this is a fairly big deal for them, too.

“It’s great, you know, this is how it’s supposed to be. That’s the way we listened to music a long time ago, where like a record [by] HÃ¼sker DÃ¼ would come out, and I would run to the store and buy it as fast as I could,” said frontman Billie Joe Armstrong. “And I don’t know if that comes from a punk-rock ethic or just the way rock music should be looked at, but, I don’t know, it’s great to see people excited about an album coming out.”

Bassist Mike Dirnt was also pleased with the crowd’s enthusiasm. For him, it was an indication of the connection Green Day fans have with the band’s latest material.

“It’s pretty incredible. Growing up, my favorite bands, I probably would’ve done the same thing, had I had the chance. It’s really nice that people feel such a kinship with our music. It’s really great,” he said.

So they signed copies of their album. And hugged red-faced fans. And posed for pictures. The line snaked around the store, past the towers of DVDs and the many copies of Breakdown, but through it all, Armstrong, Dirnt and drummer TrÃ© Cool kept smiles on their faces. In fact, though they might have sore wrists tomorrow, it looked like they were having an absolute ball.

“We’re up for this,” Dirnt said, noting that the real value of the event was in what people took away from it. “It’s about memories, and this band is about creating memories for ourselves and for everybody else… whether it’s a live show or an album or signing someone’s forehead and getting it tattooed on there.”

Plus, he added, the release of Breakdown gives him reason to feel relieved and optimistic about the future at the same time.

“To be honest, I’m just excited that this freakin’ record is out. We put a lot of work into it, so we’re very, very, very happy. And lots of bottles of bubbly things have been opened. It’s been great.”