Another day, another festival. Last week it was Coachella, yesterday it was Firefly, and today it’s the long-awaited announcement of the 2014 Governors Ball festival in NYC. It takes place from June 6 – 8 at Randall’s Island Park in NYC, and tickets go on sale at 3pm, so clear your schedule so you can make sure you get them!

They’ve got a stacked lineup this year including a recently reunited Outkast, Jack White, and Vampire Weekend at the top of the bill. Phoenix, Interpol, Foster the People, Skrillex, and Disclosure are also some of the larger names on the lineup. Some of the other notable acts on the bill are The 1975, Frank Turner, Deafheaven, Bastille, Janelle Monae, and Hunter Hunted. The lineup was released in the New York Times earlier this morning, and you can view the full lineup below. 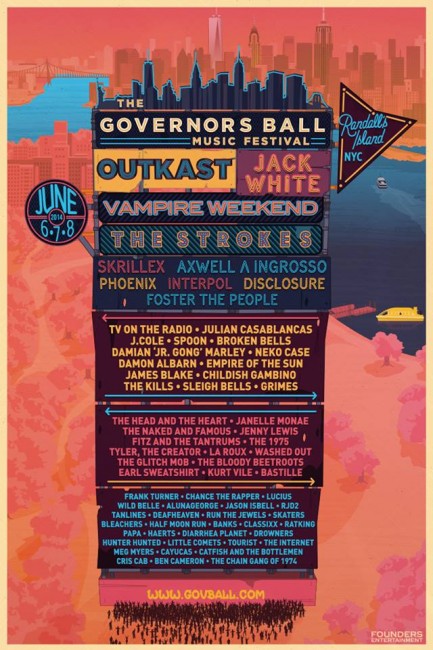