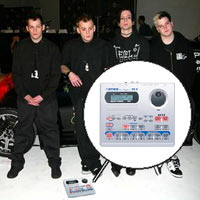 After nearly three years, Good Charlotte has ended their search for a permanent drummer. After the departure of their original drummer, Aaron Escolopio (now playing in Wakefield), Good Charlotte have fielded two touring drummers (Dusty Brill and Chris Wilson), and a host of guest drummers from bands such as The Vandals, Vroom, Mest, and Autopilot Off.

The search is finally over, and Good Charlotte has decided to take a DR-3 Dr. Rhythm drum machine with them on the 2003 Civic Tour with New Found Glory.

“It’s a great little machine,” said Good Charlotte’s guitarist and songwriter, Benji Madden. “I’ve been using it to lay down beats while writing some new songs for our next album, and I thought ‘hey, we could use this on tour!’.”

“Plus, we don’t have to pay it anything,” adds Good Charlotte’s vocalist, Joel Madden. “I’ll have extra money for Star Wars action figures.”

Prompted as to why it has taken so long to find a permanent drummer, Benji said, “We’ve been looking for a drummer for a long time, and I think Dr. Rhythm is a great addition to our band. It always sounds great and we don’t have to worry about it not being nice to our fans.”

“Yeah, ’cause our fans are the most important thing to us”, adds Joel.

When the other members of the band were asked about their new bandmate, guitarist Billy Martin said, “I’m just glad there’s another vegetarian in the band. I know Benji says he’s a vegetarian, but I knows he sneaks off at night for a mouthful of sausage – and Tony, that guy from Mest, I know he encourages him.”

“I didn’t know until you asked me about it,” said a surprised Paul Thomas. “I was wondering what that thing was doing on the floor. But whatever. What do I know? I’m just the bass player.”

Good Charlotte Hits The Road With New Found Glory For The 2003 Civic Tour On April 8.