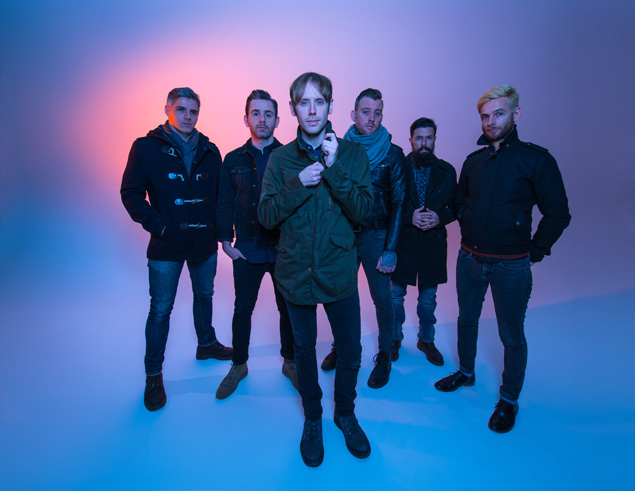 Do the people in the above photo look familiar to you? If your answer was an immediate “yes” (as it should be), we’d like to introduce you to No Devotion. The band features Geoff Rickly, Lee Gaze, Mike Lewis, Jamie Oliver, Stuart Richardson, and Luke Johnson. The band have risen like a phoenix from the ashes of past projects, namely Thursday and Lostprophets; I could try to put their story in my own words, but it’s something that should be read and conveyed as it was meant to. From the press release:

This is a story that starts with an ending. An atypical story for modern music, this is a tragedy that isn’t mythologized, a drama that couldn’t have been manufactured. In this story, a popular band does not rediscover friendship to deliver the best album of their careers. The story of  No Devotion  truly has no precedent.

By now, most people–or at least most anyone reading this–know what happened to Lostprophets, the Welsh sextet whose multiplatinum, fifteen-year career died instantly with the horrific actions of its former lead singer. What most people  haven’t  seemed to consider, however, is how the lives of the band’s remaining members–Lee Gaze, Luke Johnson, Mike Lewis, Jamie Oliver, and Stuart Richardson–were profoundly impacted. Harshly uprooted from their settled lives and careers, their own notions of trust and betrayal tested beyond measure, there was never going to be an ending in which everything could simply go back to where it was before.

“We didn’t know if we would ever make music again,” Richardson recalls, “if people would look us in the face.  Everything  felt like it was over.”

There was a long period of reflection,  a sort of self-preservation for themselves and their families. And then, the music did come, albeit not like before.

By the time they approached former  Thursday  vocalist Geoff Rickly with a batch of instrumental tracks, an updated creative template had been forged and the singer’s famously eclectic musical interests–which he spent the last few years exploring as both a solo artist and as a member of United Nations–somehow perfectly aligned with this new direction.

“To be honest, I never really listened to Lostprophets,” Rickly admits. “But with this music, we speak a common language. You don’t really grow out of punk, you grow with it. To my mind, post-punk was about taking a more sophisticated approach to that sound, and I think we all have a shared respect for that era of modern music.”

After much consideration, Rickly agreed to front the new project. In light of the recent controversy, no one believed that this was an easy request.

“I had always liked these guys in passing: they’re funny and self-aware. I didn’t think it was fair, what was happening to them. And, well, the music was too good to pass up,” he says, simply.

Which is to say that this story is not so much about alienation as it is about connection, and it’s not about redemption as much as personal reclamation.  No Devotion  provided a vehicle  for its members to become themselves again, and the two songs that comprise this, their debut 12-inch for Collect Records, were the fuel.

Those of you that are in the UK will have the opportunity to catch them play their first ever gigs, and all of the dates are listed below. Tickets can be purchased at their website. They’ll be releasing “Stay” as a 12″ through Rickly’s newly minted label Collect Records (out 21 July) or you can pick them up on iTunes now!