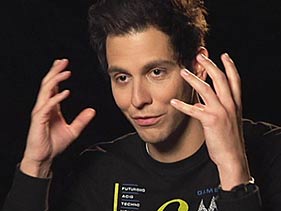 Late last year, Fall Out Boy fans were shocked when Pete Wentz posted a series of rather grisly photos on his official site, showing him sporting a mean shiner, a knock on his head and a bloody gash across his nose.

Wentz offered no explanation for the injuries, which left pretty much everyone wondering what the heck had actually happened.

Well, Cobra Starship’s Gabe Saporta knows. But he’s not about to tell.

“The mystery of Pete Wentz’s face is going to be solved pretty soon … and if I may say so myself, I saved Pete Wentz’s life. At least his face,” Saporta said. “I was on the plane next to him, I saw him in the morning, leaving Seattle. I sent him a text, like, ‘Where you at?’ We didn’t even know we were on the same plane home. He was like, ‘You don’t want to see me.’ And I just thought he meant he was really tired or something, but … his whole face was covered and bandaged.”

The injury attracted quite a bit of attention from passengers on the airplane.

“And so I sat next to him, and he would not stop bleeding. I was cleaning the blood off of him,” he continued. “I think the stewardesses thought we were a gay couple, because I kept cleaning him up with tissues, very gently, because I didn’t want to screw it up. But that’s all I’m going to say about that right now.”

And while the thoroughly dinged-up Wentz does make a cameo in Cobra Starship’s brand-new video for a remix of “Hot Mess,” Saporta said the injuries were legitimate and not, as some have speculated, part of some massive viral campaign.

“I know the whole story, yeah. It’s up to Pete to reveal it when he wants. But we definitely documented the whole thing,” he laughed. “Pete likes to turn everything into a viral thing, so if he’s gonna do it, I’m gonna let him do it. It is his face. But I will say that I saved it, so Pete, you owe me one.”