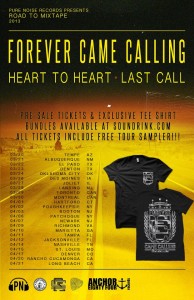 Forever Came Calling are heading out on the “Road to Mixtape” tour this spring, bringing with them Heart to Heart and Last Call. You can purchase pre-sale tickets here, and all tickets include a free tour sampler. The dates are listed below!