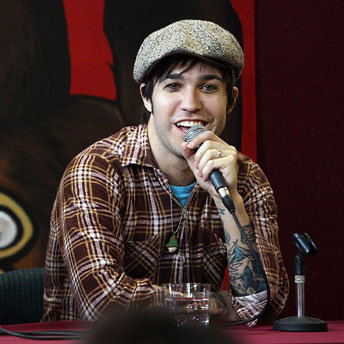 For a certain generation who grew up with Commodore 64s and Apple IIcs, downtime in computer class was spent obsessing over one primitive yet lovable educational video game: Oregon Trail. Fall Out Boy’s Pete Wentz was one of the floppy disc’s biggest devotees as a kid, so he was willing to dedicate a “retarded” amount of time to helping build the band’s own version of the game: Fall Out Boy Trail.

The online game, which has clocked more than 250,000 plays since its launch on Mar. 3, is a survival exercise like the original. But instead of helping your caravan of pioneers make their way across the colonial States, users are asked to “help the band survive a grueling tour across the country. Travel to shows, play your songs, and don’t party too hard and get in trouble!” Players are first asked to selected how hardcore they are (sell-outs presumably lose points later on), then have to load up on provisions for the journey – McNuggets and Vitamin Water. Fully equipped, your oxen-tugged wagon trucks along from city to city, encountering a variety of emo issues (someone started a rumor on Absolute Punk!) and real-life ones (your Stump is starving).

“What better than to have a game where you can let Pete Wentz die of sadness,” Wentz tells Rolling Stone. “I think that’s awesome and hilarious, because there’s plenty of people who would love to let that happen anyways – here’s your chance!”

There were several elements from the original game that Wentz was hellbent on preserving.

“Definitely dysentery,” he says of one of the most common ways a player can perish. “Going across the river and deciding whether to caulk it or not. We wanted the basic elements there, and I have an obsession with the way those things looked. Video games look so real now, but that was the escape of them, how bad they looked. And the music was bad, so we were like, we have to find MIDI-style versions of all our songs. We couldn’t find them, so we just made them.”

There are prizes for those intrepid fans who make it to the end of the adventure: “We’re giving people who finish it tickets, and there will be a few more surprises,” Wentz says.

Wily gamers will uncover the game’s multiple cheats that can rocket you towards the finale. Without giving away too much, Wentz suggests players try typing in FOB-related words whenever the game provides an opportunity to do so.

“The best thing about it is there’s no real reason for it,” he says of the game, which is part of the band’s dedication to finding “ways for people to engage” with the band beyond albums. “We don’t make any money from it. We have Vitamin Water in it but we don’t even have a Vitamin Water sponsorship.” But the game has provided him with one personal perk: “I’ve spent my entire life where people are like, you shouldn’t eat chicken McNuggets, that kind of food will kill you. Here’s my chance for chicken McNuggets to not kill me – they’ll keep me alive.”