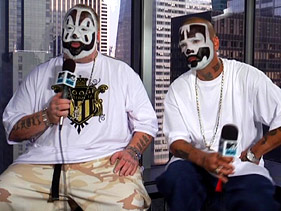 Eminem and Jay-Z will take the stage at Comerica Park in Slim Shady’s hometown of Detroit on Thursday (September 2) for the kickoff of the unprecedented Home and Home concerts. The shows feature arguably the world’s two biggest MCs onstage together in baseball stadiums in each of their respective birthplaces. There was a time back in the day when the idea of Eminem representing Detroit would have called forth the ire of fellow Motor City madmen Insane Clown Posse, but that is now water under the bridge.

“The beef we had with him was 11 years ago,” Shaggy 2 Dope explained. “That’s like beefing with somebody in high school and going to your 20th high school reunion, and you still have heat with that kid?”

In fact, the proverbial hatchet between Em and ICP has been buried for quite a few years, and the credit for that goes to late D12 member Proof. “Proof squashed that beef before he passed away,” Violent J said. “He contacted us and we had a bowling game – it was really cool. We’re something different. They could have skipped over us and said forget them, but they included us and said let’s squash it.”

ICP have even been enthusiasts of Eminem’s later work. “Some people call it horrorcore, we call it the wicked sh–, but it was cool to see him dabbling with that again on the first Relapse record, with ‘3 A.M.’ and stuff like that,” Violent J added.

Though their lyrics remain as intense as ever, ICP have clearly mellowed a bit. They have good reason to, as the 20-year veterans have legions of followers (the Juggalos), a minor merchandising empire and their very own annual festival. Their latest project is a just-released film called “Big Money Rustlas,” comedy-western and a spiritual prequel to their cult hit “Big Money Hustlas.”

With their focus on a number of different business ventures, ICP are goal-oriented. And though they’re cool with Eminem putting a face on the city they call home, they’ve got goals of their own. “We’re not really looking at how well he’s representing Detroit, because we’re representing Detroit ourselves,” Violent J said. “So we got our eye on that prize.”