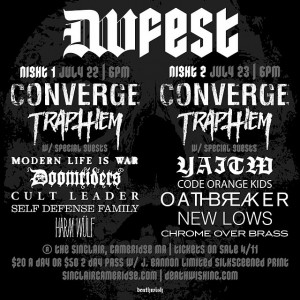 Deathwish Inc have announced a two night Deathwish event  on Wednesday  July 22nd and Thursday the 23rd at The Sinclair in Cambridge MA. Converge and Trap Them will headline both nights (their only Boston appearances all year), with support from exclusively Deathwish affiliated artists.

Tickets go on sale at 12pm this Friday April 11th at  www.sinclaircambridge.com.