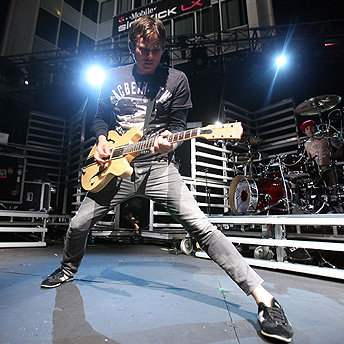 After reuniting for its first show in more than four years, Blink-182 has announced its summer tour dates.

The band’s official return comes when they play the The Late Show With Jay Leno on Tuesday, May 21st. Blink will be joined by Fall Out Boy on the road for two-thirds of their reunion jaunt, with Weezer picking up the remaining dates.

Last Thursday evening, Blink-182 closed out their set with 2003’s “The Feeling” and Dude Ranch’s “Dammit.” Bassist Mark Hoppus was overjoyed following the performance, a hugely significant event for the band whose members had spent the last four years apart.

“Thanks to everyone who was there,” he said. “Thanks to T-Mobile. And most of all, thanks to Travis and Tom. You are my brothers, and it feels amazing to share the stage with you once again.”

Weezer, who covered both Lady Gaga’s “Poker Face” and MGMT’s “Kids” during their set, also debuted a slightly new lineup on stage during their performance. Drummer Pat Wilson, who has been behind the scenes since 1994’s Weezer (The Blue Album), joined the front lines as Weezer’s third guitarist, with Devo/Gn’R/NIN drummer Josh Freese picking up the sticks (and adding another prestigious band to his rocking resume). Since Freese is committed to tour dates with Devo this summer, it’s unclear whether he’ll be joining Weezer onstage again.

Following is a list of the dates for Blink-182’s tour this summer.