A special extended episode of First Person airs this Sunday, November 6. Josh Madden joins his brothers, Joel and Benji Madden, in LA to talk about their new mix tape. The twins will discuss the evolution of the album and explain how each track came to be. 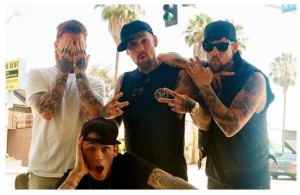 The before. mix tape is the product of Joel and Benji Madden working with other artists such as Machine Gun Kelly, Rockie Fresh, Tayyib Ali, Hollywood Holt, Billy Blue and a bunch of surprise guests.

The Madden brothers decided to work with a handfull new artists that they took a personal interest in. It is an organic project, one artist approaching another to come hang in the studio and hear some new stuff and jumping in when they feel moved by the  beats and tracks from all the different producers, singers, and rappers.

It’s a “no egos” project – a return to making music because music is your love. And like love, it’s freely given – because as Pericles said, “all things good should flow into the boulevard” to be seen, heard, and enjoyed by as many people as possible.

Tune in to First Person w/ Josh Madden this sunday at 8pm ET on  idobi Radio,  or listen on the idobi App for iOS and Android.