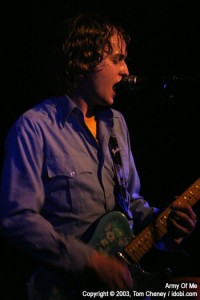 WASHINGTON — Understated may have been the best way to describe Wednesday night’s performance at the Black Cat.

It could have been a case of midweek fatigue, or perhaps Army of Me’s experimental sound was just too avant-garde for the crowd, which frontman Vince Scheuerman had to beckon to the front of the room two songs in. And though it may have been justified in light of Scheuerman’s occasional misplaced chords and too long-held vocals, the crowd’s hesitation proved to be the ultimate misjudgment for a band that, in spite of its flaws, put on a gripping show.

The biggest treat of the night was guitarist Tyler Strickland, whose modest cadence carried the weight behind Scheuerman’s soulful lyrics. At times the interplay between the two musicians was seamless, as on tracks like “The Most Beautiful Day,” a wistful ballad that could have been pulled from the American Beauty soundtrack, and “Fragile,” a gentle but powerful ode to the inevitability of sorrow and suffering.

Even without Strickland’s contributions, however, the blend of Scheuerman’s heartfelt vocals and gentle strumming would have been enough to imprison the crowd in its own emotions. The captivating, melancholic opener, “Lost at Sea” did just that, putting concertgoers in a trancelike state from which they never seemed to fully recover. At one point the frontman himself acknowledged that the persistently staid mood, too. After finishing the numbing “Goodnight, Goodbye,” he rhetorically asked if everyone in the crowd was sad, before following up by announcing that he did not want to make everyone depressed.

Eventually the crowd’s initial reticence eventually gave way to more outright support, especially after faster-paced tracks such as the unfailingly morbid “Thinking Of My Coffin” and the locally inspired “Arlington.” But no matter the crowd’s external reaction, no one could escape the acoustic set’s haunting sensibility on the inside. It may sound hackneyed, but it was just that poignant.

Between each piece Scheuerman provided a short monologue in which he attempted to further define what he intended to communicate in his downcast musings on life, love and light. He did not stop there in his efforts to engage the crowd, at one point letting everyone know that he was working on a new project with Strickland, only to withhold its name until a later point. When the identity of the new gig — which is to be titled River James — was revealed, the crowd reacted with a fitting mix of bewilderment and acceptance, followed by a spattering of delayed applause.

The set had its high moments, particularly towards the end as Scheuerman indulged the crowd with requests for some older Army of Me numbers. During these songs it seemed as if the concertgoers’ newfound excitement seemed to negate their earlier, guarded mood that predominated during the softer, more melodic songs. By the evening’s close, Scheuerman had swayed any remaining stragglers in the crowd to his side, winning their attention with fan favorites ranging from the upbeat “Come Down to D.C.” to the downtempo “Going Through Changes.”

But that is not to say that Army of Me lacked power and presence throughout the show. In fact, it commanded both in large doses, even if its music was thematically dry. Undoubtedly the soft, slow-moving tenor of the set accounted in part for the lackadaisical crowd. Still, none of that diminished the influence of Scheuerman’s delicate guitar work and careful coordination with Strickland. Looking back, the audience was not so much uninterested as it was unsure of how to react to the set — a perfectly understandable quandary given Army of Me’s seductively enchanting sound.

If anything, the night was dreamlike, a quality Scheuerman seemed to have willed from the very start as he led the audience to the depths of its own inner sanctum with his sultry voice and gentle forbearance. Anyone who was there to absorb the intoxicating melodies ever so consummately amplified by Strickland’s talent on the electric guitar was, in a word, trapped. Scheuerman’s lyrics only served to reinforced the feeling, as he intoned to the crowd, “It seems you have no choice when you love someone / I want you to know you’re whiter than snow / I want you to see, to focus, to breathe / Yes and it’s something, something you need / So forget what you’ve done / Because I want to burn the two into one.”

They certainly had no choice but to listen.