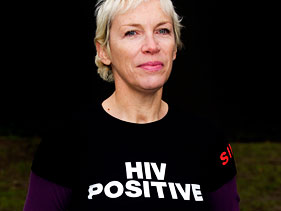 Wednesday night’s charity-focused “Idol Gives Back” episode featured the likes of Victoria Beckham, Jennifer Garner and Morgan Freeman traveling across the world to raise awareness about issues of poverty, disease and the need for the more fortunate to help those in need. Lennox appeared via satellite  in the midst of the two-hour philanthropic effort.

“It will raise questions, I know, as to whether I am HIV-positive,” she said of the shirt. “And I can tell you, actually, the good news is I am not. However, many people are.”

To some, no doubt, it seemed like a provocative statement to make on a reality show, but Lennox has been wearing the shirt for years. The message is intended as a statement of solidarity with HIV- and AIDS-afflicted people in sub-Saharan Africa. Entertainment Weekly dug up a 2009 YouTube video in which Lennox explains the origins and intentions of the shirt.

“In a country like South Africa, where HIV is so prevalent, and yet you have stigma where people are afraid to openly come out and say that they’re HIV positive,” Lennox said, “this T-shirt, whoever wears it, is making a statement of solidarity, and they’re saying, ‘We’re coming out from behind the shadows. We’re trying to normalize what is a preventable thing. It doesn’t need to have the stigma.’ ”

Lennox was scheduled to perform on Wednesday’s “Idol Gives Back” – profits from which go to charities like Children’s Health Fund, Feeding America and Malaria No More – but she was unable to travel because of ash from the Icelandic volcano. Still, she appeared in a video segment about medical innovations that saved the life of a 7-year-old girl with pneumonia and AIDS. Lennox reappeared later in the show, wearing the HIV T-shirt, to sing “Universal Child,” a new song currently available for download on iTunes.