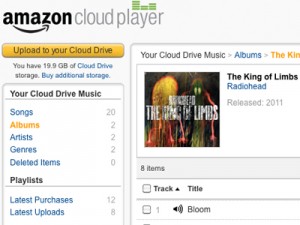 A new Amazon.com Inc service that lets customers store songs and play them on a variety of phones and computers is facing a backlash from the music industry that could ignite a legal battle.

Amazon’s Cloud Drive, announced on Tuesday, allows customers to store about 1,000 songs on the company’s Web servers for free instead of their own hard drives and play them over an Internet connection directly from Web browsers and on phones running Google Inc’s Android software.

Sony Music, home to artists such as Shakira and Kings of Leon, was upset by Amazon’s decision to launch the service without new licenses for music streaming, said spokeswoman Liz Young.

“We hope that they’ll reach a new license deal,” Young said, “but we’re keeping all of our legal options open.”

Amazon beat rivals Google and Apple Inc into the market for such “music locker” services, which are meant to appeal to consumers frustrated by the complexities of storing their favorite songs at work, home and on their smartphones. Apple and Google were expected to launch their services at the end of last year.

Music labels were informed of the plans last week. Only later did Amazon address the issue of negotiating licenses, one source close to the discussions said.

That executive called the move “somewhat stunning” and noted that some within the media industry said the service might be illegal.

“I’ve never seen a company of their size make an announcement, launch a service and simultaneously say they’re trying to get licenses,” said the executive, who requested anonymity because the discussions were not public.

In 2007, EMI sued MP3tunes, which offered a similar service. Consumers are allowed to store music files on their own computers, but it is unclear whether they have that right when they use remote storage services offered by cloud computing.

“The labels have engaged in a legal terror campaign over the last 10 years using litigation to try and slow technology progress,” MP3tunes founder Michael Robertson said of the music industry’s latest reaction to Amazon’s plans. MP3tunes is based in San Diego.

Amazon’s service is part of its plan to be a bigger player in the digital content business and reduce its reliance on the sales of CDs and books.

“They don’t have leadership in digital formats,” said BGC Partners analyst Colin Gillis. “The next big race is locker services — that’s what we want.”

Gillis said he expected Google to introduce a remote music storage service in May and for Apple to follow suit in June.

Although Amazon’s service lets users listen to music from most computers or phones regardless of where they bought the song, it will not work on Apple’s iPhones or have an “app” on that company’s devices.

Amazon said customers would initially get 5 gigabytes of free storage, enough for about 1,250 songs or 2,000 photographs. They can buy 20 gigabytes for $20 a year.

Alternatively, a customer can get an upgrade to 20 gigabytes of free storage with the purchase of any MP3 format album from Amazon. New music purchases from Amazon saved directly to the cloud service will not count against any storage quota.

Users can save music files in MP3 as well as the AAC format, which is the standard for Apple’s iTunes service.