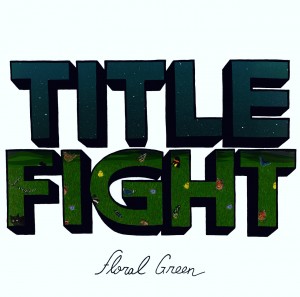 Hype: some people let it affect what they do, while others simply don’t give a fuck. For their second studio album Floral Green, Title Fight stuck to what they do best – doing whatever they very well please. Produced by Will Yip (Citizen, None More Black),  the album is pristine yet raw and shows an originality many bands today lack.

The first half of the album sort of leaves us where their debut full-length Shed left off, but still has a freshness to it that keeps the songs from seeming repetitive. Opener “Numb, But I Still Feel It” kicks off with a steady intro and serves its purpose to spark your interest.  Ned Russin and Jamie Rhoden trade off vocal duties throughout the album, each with a very distinctive difference between songs. Rhoden’s voice reels you in on “Secret Society” as he sings “I’ve made promises that I can’t keep” which soon breaks into guitars that will get stuck in your head and keep you nodding along. He also shows off his softer side, in contrast to Russin’s rougher vocals, in “Head In The Ceiling Fan,” a long and spaced-out song that almost serves as a break between sounds on the album.

The songwriting on Floral Green is a step up from anything the band has done before, trading in simple lyrics for more complex ones and nailing it in the instrumentation department. “Make You Cry” is a melodic number that comes in strong while “Sympathy” shows the band pouring out their emotion. The latter is sure to be a crowd favorite as the repeated “Never wanted sympathy, just wanted to be something” is yearning for a sing-a-long. The album continues on with a punk-meets-grunge sound surrounded by moody yet relatable lyrics. “Lefty” makes good use of smooth vocals and distortion and leads nicely into closer “In-Between” which could easily be described as resembling a modern day, slightly toned-down Nirvana.

Floral Green is one of those albums you really have to listen to in order to fully grasp as words can’t quite describe it. While some fans might still yearn for that pop punk sound the band once had, this album provides a new depth and progresses from the first track to the last. Title Fight are a band who truly deserve the hype that surrounds them – even if they don’t pay attention to it – as they have proven they are able to stand out from their peers by continuously evolving and releasing innovative material.