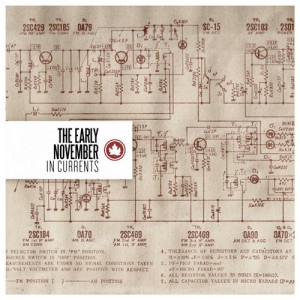 A lot has changed in the six years since The Early November released their last album, the triple-disc effort The Mother, the Mechanic, and the Path. After taking a few years off and reuniting for a handful of one-off shows, the band announced they were coming back full-force with a new record, and the end result, entitled In Currents, was well worth the wait. Engineered and produced by frontman Ace Enders and recorded in his own Living Room Recording studio, the album is a perfect blend of the raw emotion that was present on the band’s 2003 classic The Room’s Too Cold with a newfound sense of maturity.

“A Stain on the Carpet” starts the album on a slower note, with the quiet tremolo of the guitar matching Enders’ voice as the drums come in during the first chorus and lessen again for the second verse. This ebb and flow is present not only in the songs themselves, but also in the sequencing of the record. As the chorus comes in again, the song explodes into the gorgeous layered sound that Early November fans have become familiar with. The addition of strings is enough to tear at your heart and as the song closes with a lone xylophone, “Carpet” sets the pace for what to expect on In Currents. The second track, “Frayed In Doubt,” shows the band as fans of The Room’s Too Cold remember them — both the rough edge and fragility of Enders voice are ever-present, and drummer Jeff Kummer kills it behind the kit.

The title track may be the best song on the album. The driving drumbeats in the intro sound like heartbeats as they lead into the quieter bridge and suddenly stop before catching you off guard with one of the catchiest choruses the band has ever written. “In a digital age, I’m feeling outdone,” Enders sings in “Digital Age,” a song that fans came to know on the band’s recent comeback tour. In the song’s short but sweet two minutes Enders manages to convey a sense of authenticity with his refusal to conform to the digital way of life that is so prominent in an age where holograms are performing at Coachella. The song has an organic sound to it, with Enders living up to his pledge to write “a song that a computer can’t fake.”

Reminiscent of “From Here to L.A.” from The Mother, the Mechanic, and the Path, “That’s Not Your Real Name” showcases The Early November’s ability to turn acoustic songs into anthems. Enders’ voice shines on the album’s acoustic-based and slower tracks. “The Smell of This Place” has a southern folk flair in its guitar tones, giving the track a sense of nostalgia. As Enders sings about trying to convince himself a moment in his life has been worth it and that he shouldn’t have any regrets, he reaches a resolution at the end of the song as he realizes all the struggles have been worth it. It’s a great song for anyone who is struggling through a hardship in his or her life. The following track “Wearing a Tie” seems to hit you in the face with harsh guitar tones in stark contrast from its mellow predecessor.

“Call off the Bells,” the closing track, is not only one of the best songs that The Early November have ever released, but it’s also one of the best songs of the year so far. The Early November have a way of creating songs that wear you out emotionally (in the best way possible) and the last three songs on the album do just that. The first time you listen to In Currents, you may not be sure that the album is over at first — the song will leave you in a trance, expecting more. The call-and-response vocals between Enders and his wife Jennifer are beautifully haunting over an explosion of cymbals and guitars. This kind of emotional resonance is exactly what The Early November fans had been missing before the band’s triumphant return.

In Currents is a true return to form for the New Jersey emo veterans. While some reunions are motivated by money or nostalgia, it’s clear that The Early November poured their hearts and souls into the making of this album. It was a long six years of waiting, but those six years allowed each member of the band to mature musically and hone their craft, finally leading them to create the masterpiece that is In Currents. One thing is certain: The Early November are back and better than ever.