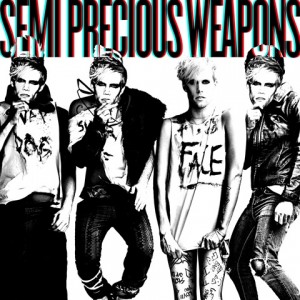 The terms “raw”  and “glam” are seldom used to describe the same band, but they suit New York’s queer-core Semi Precious Weapons quite well.

The band’s latest release,  You Love You, is peppered by self-indulgent lyricism and war cries by frontman Justin Tranter.

This band made a splash with the free release of 2008’s We Love You, later released on Razor and Tie Records. The Internet release was made possible via lead singer Tranter’s successful jewelry line, sold at Barney’s and early Semi Precious Weapons shows, which consisted of three years playing any bar that would have this dirty band rock its dance floors.

One can imagine that the title of the record, the band’s first with major label Geffen, comes from the fact that Semi Precious Weapons are making music for a cause greater than the band itself — rock ‘n’ roll.   Whether the song playing is the eponymous single or the slow-jam love song that closes the record, “Look at Me”, the same raw energy that makes this band a must-see shines through. That energy is the special ingredient that separates this brand of music from its peers, creating a sound that is greater than the sum of its parts. The band is able to do so much with the four standard instruments that rock bands are known for, at times making it seem as if Semi Precious Weapons make up a rock ‘n’ roll orchestra.

The quartet of Berklee School of Music graduates has been opening for Lady Gaga on The Monster Ball Tour, thrusting its literal translation of sex, drugs and rock ‘n’ roll upon 18,000 people every night.

Transitioning from college in Boston has created a unique opportunity for the band to separate itself from the New York hipster scene.

“We got to New York and it was nothing but girls pretending to be in ‘Sex and the City’ and dudes schwerking v-necks, insisting they don’t love The Strokes,” Tranter said recently. “So our bitch asses decided to stop complaining about New York’s hipster plague and start the filthy party band we always wanted to see.”

The band’s success is no accident, with Tranter having a degree in songwriting and drummer Dan Crean earning a degree in classical composition from the aforementioned prestigious university. In addition to this pair, Cole Whittle and Stevy Pyne are no slouches, having Berklee degrees themselves. The resulting mixture has created a local buzz so strong that readers of the Village Voice tabbed Semi Precious Weapons as the “Best Band in New York”  last year. The New York-based quartet channels the 1970’s glam-rock era David Bowie and The New York Dolls and mix in the grit of garage bands like The Hives to create a sound that takes fun and filth “very, very seriously”.

With this latest release, no lyric seems more appropriate than “rock ‘n’ roll never looked so beautiful” and soon enough, this band will be able to pay the rent, and the music remains “fucking gorgeous.”  (4.0/5.0)

Fans can purchase the album online via iTunes. The album is due out June 29 in the U.S.