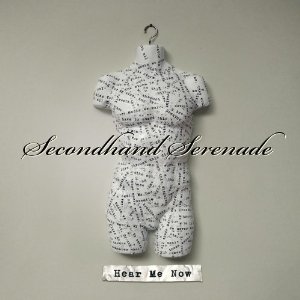 John Vesely, the man behind the ballads of Secondhand Serenade, returns as the same emotive musician with the album Hear Me Now.

Vesely had stated that this latest effort would take a more upbeat direction compared to his previous albums. I hear no striking differences, but sticking with the sadness is not necessarily a negative thing for a band like Secondhand Serenade. “You and I” and “Is Anybody Out There?” are probably Vesely’s best attempts at a cheery song reliant on loud guitars and echoing drums for its sonic superiority. However, even these tracks pull at the heartstrings more than they pull at the corners of our lips into an untroubled smile.

The content is more self-reflective; Vesely seems to have tapped into his own consciousness for the energy, reaching some level of self-actualization along the way. The message still comes from the tender stories that we have sniffled over previous times. Evidently, Vesely still balances nostalgia with hope and love with loss, but the only difference now is that he is stronger with stability.

Vesely’s lyrics are not incredibly revolutionary or profound, but they contribute to the approachability of each song.

In “Only Hope,” Vesely sings, “Please pick up the phone and call me ‘cause I’m lonely and my mind is aching; can’t you see I’m for the taking?”

If any one of us were to analytically approach these lyrics, we would most likely grimace over how saccharine it sounds. But Vesely reminds us that a great song does not always need depth in diction but rather a resonation of the purest feelings. It does not always matter whether one has mastered prose because in Secondhand Serenade’s case, how the message is conveyed is certainly more powerful than what the message is.

The musicality remains laden with the characteristic Secondhand Serenade twinge of sadness. Vesely carries a voice suited for quivering ballads and sadness. His songs are deeply mired in sentimentality with the additional help of the piano, Secondhand Serenade’s best weapon. It is the meat of the formula that makes Vesely such a success.   Furthermore, on top of his vocal and piano talents, Vesely has chosen the best people to help him on this album. Juliet Simms lends her thundering vocal chops to the last track “Hear Me Now,” ultimately wrapping up a solid collection of songs showcasing the sentimental growth that Vesely has undergone.

In 2005, the then-unknown Secondhand Serenade began its humble process of finding listeners on Myspace. In a matter of months, John Vesely was claiming the hearts of thousands of young women desperate for a good cry in ballad form. Perhaps Secondhand Serenade found its success because it brought the shamelessly emotive music that we needed at a time when the television and radio were saturated with bubblegum music. Five years later, Vesely has proven with Hear Me Now that ballads are what he knows, and ballads are what we still want to hear. (3.5/5.0)

Hear Me Now is available now for purchase on iTunes.