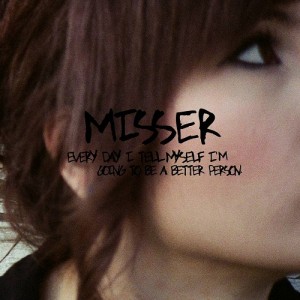 Every Day I Tell Myself I’m Going To Be A Better Person. That may be a mouthful to say, but it’s the well-fitting title of Misser’s debut album. Tim Landers of Transit and Brad Wiseman of This Time Next Year have taken their pop punk roots, added a touch of cynicism, and come out with an album that is sure to leave its mark.

While the lyrics have some consistent themes, like drinking and missing her, there’s plenty of diversity to be found in the songs. Opener “Permanently” serves as a somber intro before the album properly kicks off with the pensive “Time Capsules.” With its dueling vocals and raw, honest lyrics, this song sets the tone for the rest of the record. Upbeat tracks like “Weightless” and “I’m Really Starting To Hope The World Ends In 2012” are almost too catchy, the latter taking a stab at mainstream media and modern society. Reworked versions of “Just Say It” and “She Didn’t Turn Out To Be That Cool” are equally addictive, finally getting the high quality production they deserve. The shining star of the album is easily “Reconnect This,” which sees Landers and Wiseman trading vocal lines effortlessly over gritty guitars in the style of an early Taking Back Sunday.

The album isn’t without its problems, however, especially with its slower songs – “Stay Asleep” tends to drag on, while “Sanity” seems too abrupt. “I’m Sick” serves as the definitive breakup song, but can’t help but come off as a bit immature with its refrain of “Fuck you and fuck them / I’m over it.” Thankfully, the album closes with a home run with “The Waits,” a heartfelt song about the struggles of long distance relationships. Landers, who’s responsible for most of the band’s lyrics, pours his heart out with lines like “I hope like hell you mean it when you say that I’m worth the waits,” ending the album on a strong note.

For a debut album, the duo have definitely found their niche. Producer Gary Cioffi, who worked with Landers on Transit’s 2011 release Long Lost Friends, was a perfect fit – the songs sound pristine without losing their rawness. Misser may just be considered a side project to some, but the duo definitely shine on their own. If they don’t get their wish of the world ending this year, another Misser album would be more than welcome in the future.