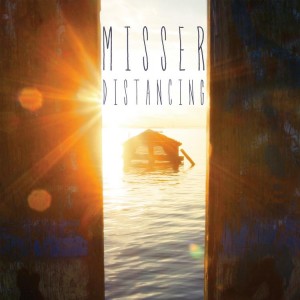 All too often side projects come and go, only attracting the attention of a couple fans interested to see what else their favorite band members are capable of. Misser originally started out as a side project between Transit guitarist Tim Landers and ex-This Time Next Year guitarist Brad Wiseman, but after the release of their first full-length Every Day I Tell Myself Myself I’m Going To Be A Perfect Person last year, the project has enjoyed the praise and attention of a full-time band, establishing themselves as an important component of the rising indie pop punk scene. The Distancing EP offers yet another couple songs for fans to sink their teeth into, as well as coming off as another collection of stories that the band needed to get off their chest.

The first song “Goddamn, Salad Days” opens with driven, energetic guitar riffs and extra gritty vocals from both Wiseman and Landers, as the band leans closer to punk than pop compared to their full-length. The guitar work also plays a larger role with the vocals lying further back in the mix. While the song is comparatively heavier, it still contains subtle hooks that keep the listeners engaged. “Infrared” continues with the catchy punk rock aesthetic while also utilizing bright, lyrical guitars reminiscent of Transit. The song also features some of the band’s best songwriting as Wiseman and Landers sing, “Let me be the voice in the back of your head / Reminding you some things are better left unsaid / I keep waking up alone, bottle next to my bed / Checking my pulse with the infrared.” This is possibly the best song on the EP, as the bridge also serves as a great example of the band’s seamless vocal dualism.

The album continues to become progressively catchier with “Burn Out,” which contains bright, catchy riffs similar to the debut album. The track contains some interesting sonic balances at certain points when Wiseman descends into a low emo croon balanced by Lander’s hard-edged vocals. Although the song feels relatively upbeat, the lyrics are surprisingly depressing. Yet this song’s emotional impact is nothing compared to the following track, blatantly titled “Alone, Die.” Less than two minutes long, it’s a straightforward, bitter outburst as Wiseman and Landers unapologetically repeat, “You’re gonna die alone.” After releasing their anger and resentment in one fell swoop, the band calms down for closer “Slow It Down // Write It Out.” Gentle and melodic, it forms a fitting end to the EP. Both vocalists smooth out their voices, letting them run over the rich layers of acoustic guitars while singing of hope and self-defiance in true pop punk spirit.

While nothing revolutionary compared to their full-length, Distancing offers another opportunity for Misser to showcase different sides of their music. What makes this EP so great is that the band didn’t waste any of the space on it – every single one of the tracks contains something different that allows each to stand out on its own. Whether you prefer spastic punk rock, more melodic pop punk, or something in between, one of the songs on the EP will suit your tastes. This EP will serve as a welcome addition to those who loved the full-length, and get them excited again for what else the band has in store.

Misser – Every Day I Tell Myself I’m Going To Be A Better Person: Album Review