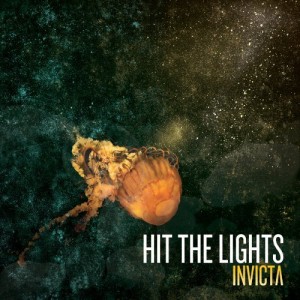 In war, there are always smaller battles to get through before you conquer your enemy and claim victory. For Hit The Lights, this was the case with the appropriately named album, Invicta. Taking three years to make, the band had label troubles and other problems to face before recording the album. That time has proved fruitful though as the band has broadened its sounds while still keeping the same pop punk sensibilities that fans have come to love.

Invicta kicks off with the powerful “Invincible” displaying that the band is ready to be back in full force and take chances. “Gravity” lures the listener in right away with its chorus, while “Earthquake” reaffirms that the band is here to stay. “So Guilty” proves to be the low point of the album as the song is drawn out and repetitive, but things quickly pick back up with “Get To You” as the story in the lyrics captivates you. The strongest track on the album is easily “Float Through Me” as drummer Nate Van Dame keeps the beat, while singer Nick Thompson pours all his emotion into singing “Am I a ghost or am I just something new, that you can see right through?”  “Should’ve Known”, “All The Weight” and “Faster Now” keep up with the strong mix of fast and slow tempos on the album, the latter song showing lyrical prowess with the help of Yellowcard’s Ryan Key. Fans of the band’s previous material will quickly latch onto “Take Control” with its upbeat demeanor and the line “So tell me all about it, speak slow” not being able to come out of your head. Closer “Oh My God” will leave you saying just that. It’s definitely not something one would expect from Hit The Lights, as the spacey feel is more reminiscent of something off a later Brand New album, but the band nails the sound.

With Invicta’s darker undertone, Hit The Lights has clearly grown from the high school sound they once had. The vocals are better, the instrumentation is better, and aside from a few shaky spots, this may be considered the best album of their career so far. Having a full touring schedule on their hands to promote the album, Hit The Lights’ battle isn’t over yet, but it seems like they may be able to claim an early victory.