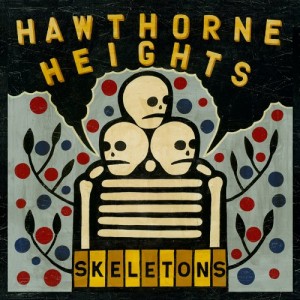 Let’s toast to acceptance: the fifth, final and most rewarding phase of the universally accepted five stages of grief, through which Hawthorne Heights returns with its most melodious work,  Skeletons.

The guys haven’t completely forgotten the loss and trouble that led them here, however. Hawthorne Heights has been through a lot within the last couple of years, from legal battles to the untimely death of a beloved bandmate. From the start of the album, the band makes it very clear that it would trade all the attention it has gleaned over the years just to have Casey Calvert back. With “Bring You Back,” fans immediately see that the band still thinks about Calvert, writes for Calvert and makes music in the name of Calvert. The one thing that makes writing about loss now different from doing so for Fragile Future is the new, less somber direction that grieving has taken them. Taking that new direction has provided the band not only with the acceptance of vulnerabilities but also the acceptance of newfound strengths.

The vulnerabilities can be read through the lyrics. Hawthorne Heights has never written the most unconventional lyrics of symbolic, sorrowful tales, as discovered with the release of If Only You Were Lonely. In fact, the band always has been straightforward with its cutthroat yet somewhat trite metaphors for pain. The band still does not envoke elaborate, eloquent verses with Skeletons; the same motifs of hospitals and sickness are evident in tracks such as “Broken Man.” On the other hand, this time the message is more relatable and developed. The lyrics are not so frightening anymore as they were in the much more somber Fragile Future. Instead of just throwing fans the emotional wreckage, the band encourages everyone to find solace in sharing the sentiments of pain and joy that it has felt throughout time.

The band acknowledges that it is still susceptible to sadness, but Hawthorne Heights’ newly discovered strengths — found in the musicality — almost outshine the vulnerabilities that are exposed through the lyrics. Skeletons sounds punchy and full, even without all the guitar-driven melodies that the guys used to push in prior albums. The unclean vocals are back with the help of guitarist Micah Carli, and they flawlessly parallel frontman JT Woodruff’s new range and experience with his vocal capabilities. Combine the well-developed vocals with the undeniable hooks, and songs such as “Last Few Words” and “Hollywood and Vine” open fans ears to a new level of catchiness not seen in previous hits like “Ohio is for Lovers.” It is a new dimension of Hawthorne Heights; the band has proven that it is capable of creating a versatile library of emotive songs.

The one setback to all the consistently dynamic hooks one after another is that the tracks do not sound noticeably different from each other. Regardless, fans can appreciate the album as a whole. It has been mastered wonderfully, and the development in this band — both personally and musically — is finely captured.

With Skeletons, Hawthorne Heights has managed to complete its versatile identity without compromising artistic integrity. Hawthorne Heights is still the same band that created the quintessential album for the emo genre six years ago. The band still writes about love and loss, and moving forward. However, what is truly successful about Skeletons is that it is a final product of a band that cannot be pigeonholed into any sort of genre anymore. Hawthorne Heights has shown its listeners that it can convey its message in a number of different ways.

And while fans begin to accept the many dimensions of this band, Hawthorne Heights seems to have experienced acceptance of its own with the release of Skeletons. It has accepted that vulnerability is a constant presence that will also come with strengths. The efforts of a band whose members have fallen together only to get back up with a more robust heart for music should be commended.

Fans can purchase the album from iTunes.