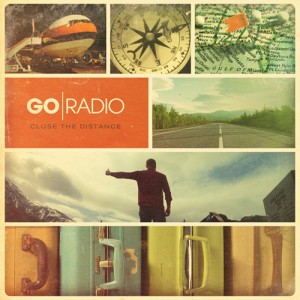 After the release of the subpar first single “Go To Hell,” the expectations for Go Radio’s newest release Close The Distance suddenly plummeted to average. As the first song that fans heard off the new record, “Go To Hell” was a bit unsettling — the track starts off with an intro suggestive of 2010’s “Goodnight Moon” only to unfold into a full-blown pop song completely different from anything the band had ever released with nothing to distinguish it but vocalist Jason Lancaster’s inimitable voice. However, don’t let the initial cynicism stop you — Close The Distance turns out to be a solid album that pop rock fans should get their hands on as soon as possible.

Opening track “I Won’t Lie” sets the bar high as a radio-friendly love song which features a piano track that older Go Radio fans should appreciate. Follow-up track “Baltimore” keeps the energy high with a lighter pop sound than what listeners might be used to, but this song suits the band well. They manage to maintain their new lighter sound while still highlighting Lancaster’s vocal range and raspy edge that have set him apart from the rest since his Mayday Parade days. Picking the album’s pace up a bit is the more favorable of the album’s two singles, “Collide.” The single paired with the album’s title track are two of the most energetic tracks of the record; they’re definitely songs listeners can dance to and should be eager to see performed live.

The album slows down with “What If You Don’t,” a ballad which simply brings together piano and vocals to create a beautiful compilation that will leave any listener with tears in their eyes. “Things I Don’t See” and “The Ending” pick the tempo right back up as a pair of tracks that stand out for their unparalleled energy matched with the evocative lyrics that Go Radio are known for. The album comes to a close with another slower song, and possibly the most heartfelt track on the record, “Hear Me Out.” The song begins with just acoustic guitar and Lancaster’s vocals before smoothly adding in the piano and finally bursting into a full-band arrangement reminiscent of the band’s classic style while still incorporating their newer sound. The song closes the album perfectly as an eclectic blend of the band’s past and present.

As a whole, Close The Distance is different than previous Go Radio releases — there’s no denying that. But despite the fact that there are no “Letters and Love Notes” or “Goodnight Moon”-esque tracks on the record, it still makes for a solid, lighter pop rock album that fans of a variety of different music can enjoy. The constancy of the piano throughout the record not only ties the tracks together but also ties the album together with their past releases, and the band also maintain their traditionally powerful lyrics. Although the idea of a band changing their sound always takes some getting used to, this record is bound to grow on old and new fans alike.