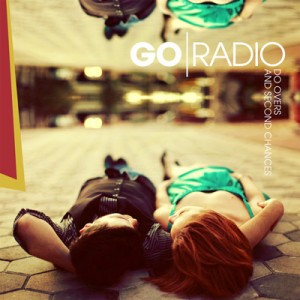 It was bold and aptly titled. And it established Go Radio as one of the giants of Fearless Records.

Do Overs and Second Chances, released April 20, proved a strong effort following the band’s independent EP, Welcome to Life. Though disappointingly short in length, it undoubtedly depicts the talent and cohesion that the musicians of Go Radio have achieved despite their relative lack of experience. The seven-song album, themed around love, loss and betrayal, is sure to capture the world over, including the fragile hearts of the romantics and the jaded.

Former Mayday Parade frontman Jason Lancaster, famously known for his clever hooks and distinctive vocals, does not venture far from his roots and admittedly puts his pipes to good use on all seven of the tracks. Renowned for his lyricism, Lancaster delivers a trademarked bite in every song that leaves one wincing at the thought of being the unfortunate person to warrant the use of his harsh words. The album truly is Lancaster’s own second chance, and he is evidently able to make the most of it.

“When Dreaming Gets Drastic” opens the EP with a dramatic start. Heavy guitar rifts courtesy of Alex Reed do little to ease one into the track, but a catchy “whoa oh oh oh” grabs the listener as Lancaster spitefully belts out lyrics of vengeance that persist throughout the record. “Thanks For Nothing” is a stark contrast, with considerably less intense opening notes accompanied by the piano and Lancaster’s passionate croons (though his threatening words do not match the soft music). If ever there were a song on the record that disillunioned teenagers would immortalize in their Facebook status updates until the end of time, this would be it. A rise in tempo indicates a smooth change side by side Lancaster’s angst, which he and backup vocalist Alex Reed turn into a clever verbal volley: “You were a friend, to the point of a brother / And we had a dream, that we built on each other / The moment was scarred by this flame is forgotten / That was my girl and she was the best one in the world.”

The tracks that follow are able to stand on their own when listened to as separate units. But when listened to in succession, they come across as similar and blend into one big song. Because there is little variation in tempo and instruments throughout the album, the listener has the added responsibility of giving extra time to each song in order to distinguish it from the next. Still, Lancaster’s ability to communicate complicated emotions through his lyrics is remarkable.

“Goodnight Moon”, the final track, is the EP’s only ballad, which is a blatant shame. Accompanied only by the piano for the first two verses, Lancaster’s soulful vocals come close to warming the heart as all of the pain of the previous songs is seemingly washed away. As he wonders aloud “So goodnight moon and good night you / When you’re all that I think about, all that I dream about / How’d I ever breathe without a goodnight kiss from goodnight you?” Steven Kopacz’s subtle drumming frames the track beautifully and provides a sweet and unexpected end to an otherwise bitter record.

While it is vividly apparent that Go Radio has not been together for very long, it is evident that its members are no strangers to making music. Each musician is able to bring an individual flavor to the mix that defines the band and will undoubtedly continue to do so for a long time to come. With Do Overs and Second Chances, Go Radio has successfully aligned itself with a release of which it may be truly be proud.

Do Overs and Second Chances can be purchased on iTunes.