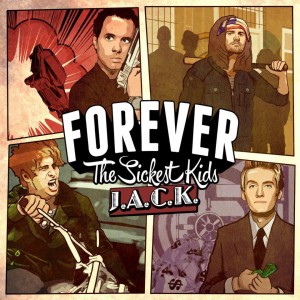 Like many bands, Forever The Sickest Kids have suffered from releasing an incredible debut album, Underdog Alma Mater, and always falling short of fans’ expectations with subsequent releases. With their third album, the band has another shot at redemption. After their original label shut down, the band lifted fans’ hopes by signing to Fearless Records, one of the top alternative music labels. This is also their first full-length effort after the departure of Kent Garrison (keyboards) and Marc Stewart (guitar). Continuing as a four-piece, the band titled their third album, J.A.C.K. – after each band member – stressing this album is a product of just these four. In doing so, they got rid of the regular slew of songwriters and producers. For the first time, they wrote most of the songs themselves and stuck with one producer, Mike Green (All Time Low, Set Your Goals). Vocalist Jonathan Cook also claimed these songs would be a return to their roots. This album sounds great on paper, but when you actually press play, J.A.C.K. falls flat.

Despite slimming down on helping hands, the band surprisingly seems to lack much direction on the end product. This confusion presents itself immediately in the bizarre orchestral intro to “Chin Up Kid,” which was not included in the single version. At first I thought I was listening to the wrong album. When the actual song kicks in, we return to familiar territory of chugging guitar riffs and catchy choruses until the bridge where the band implements electronic elements that only distract the listener. “Don’t Let Me Go” continues the trend with a solid pop rock song hindered by an awkward techno bridge. “Ritalin” dares to address dark subject matter including school shootings and dying alone, yet you are left feeling unsure if this band should be tackling these kinds of subjects. Acoustic jam “My Friends Save Me” addresses the value of friendship in true pop punk fashion, yet on the next song “Cross My Heart,” Caleb Turman sings “My friends / They’re never there for me,” immediately undermining the sincerity of the previous track.

That’s not to say there isn’t anything good on this album. Single “Nice to Meet You” makes up for what “Chin Up Kid” lacks, with a stronger structure and unique lyrics. “Count on Me” also includes refreshingly interesting lyrics such as “I was just a shoulder you could cry on / You ruined my favorite shirts,” as well as a gospel-influenced chorus intended for massive sing-along’s. “La La Lainey” is probably the catchiest song on the whole album, despite its confusing lyricism – a love song about a girl who is into girls? Two other standouts on the album include “Nikki” and “Kick It,” the former of which was co-written by Patrick Stump and presents a potential direction the band could grow in, while the latter is the most similar to Underdog Alma Mater and best represents the “return to their roots” that Cook mentioned.

In the end, J.A.C.K. is not a terrible album – it’s just not very memorable.  The album feels messy at times and unclear about the message it wants to convey. The entire album could have been immensely improved simply by removing all its electronic parts; the majority of them felt extraneous and off-putting. There are some catchy tunes within its midst, but none of them compare to what the band has proven themselves capable of in their previous discography. None of these songs were quite able to re-ignite our ears the way “Keep on Bringing Me Down” did. With every release, a band can either grow into something new and interesting or continue releasing what their fans fell in love with. Forever The Sickest Kids are unfortunately stuck between these two. All the songs on this record are fun and enjoyable, but once again, I’d just rather listen to their previous music.