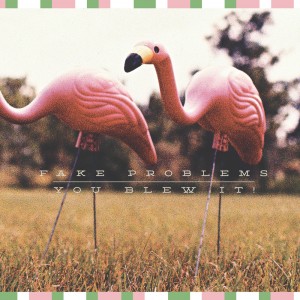 Seasoned indie rockers Fake Problems and up-and-coming punk band You Blew It! have teamed up to make their home state proud with the aptly-titled split  Florida Doesn’t Suck. With Fake Problems between album cycles and You Blew It! having just released their debut full-length last year, this split serves as the perfect opportunity for both bands to show where they currently stand musically. You can’t help but feel a father-and-son vibe with Fake Problems’ polished indie punk followed by You Blew It!’s greener, looser take on rock ‘n roll.

Fake Problems kicks the split off with “Small Devil Song,” a slightly playful track with Chris Farren’s immediately recognizable vocals sitting front and center. When the guitars enter, the driven riffs are reminiscent of long roads trips and days spent at the beach. Add in the catchy chorus and this is definitely a feel good song fit for the summer.  The production is also very tight and enjoyable, thanks to the band’s own bassist, Derek Perry, helming the soundboard as well. “Gone Before Dawn” shows off the band’s indie side, slowing down the tempo while featuring bright, clear guitars and layers of gentle vocals. Yet another infectious chorus will have fans joining in as Farren sings, “I ran away / I ran away / It was too dangerous to stay.” These two tracks make it obvious that the band hasn’t lost any of the magic from their last album, Real Ghosts Caught on Tape, and will keep listeners eagerly anticipating their new full-length this year.

You Blew It! make their introduction with a symphony of crashing cymbals and layers of distorted guitars on “Batavia, NY.” While Fake Problems were cheerful and lively, You Blew It! are considerably more gloomy from just the opening notes, with lyrics like “I can’t pretend that everyone here is actually my friend / Just breaking your backs to fit in.” Unlike Fake Problems’ solid production, You Blew It! feel a lot more raw and looser, which isn’t necessarily a good thing. The vocals are pushed far back in the mix, making it difficult to hear them, and the cacophony of cymbals and guitars sometimes get in the way of what is obviously a very emotional song. I feel like this song would translate much better acoustically. The closer “I’m a Kid, That’s My Job” follows in a similar vein. It starts off with a catchy guitar riff, but all the instruments appear unfocused and clash with each other as the song progresses.

On this release, it feels like You Blew It! have regressed musically. The songs on their LP, Grow Up, Dude felt tighter and catchier. This band is still a diamond in the rough – there’s something special and poignant in their melancholic energy, if only they honed their delivery of it. Fake Problems, however, have managed to continue producing their unique, catchy brand of indie rock. Both bands have proven that Florida Doesn’t Suck, with Fake Problems maintaining what they do best, and You Blew It! showing they have the potential to become much bigger than they already are. This split is just another step in both bands’ careers as we eagerly await what the rest of the year holds for both of them.

Album Review: You Blew It! – Keep Doing What You’re Doing