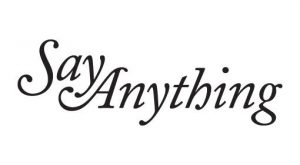 This post tugs at my heart-strings and is going to be hard to write.

A band that many of us grew up with, have shared tears of joy and pain, danced with and screamed our lungs out to, Say Anything – is saying good-bye.  At least, for now.

In a lengthy but in-depth letter on the Say Anything website, lead singer Max Bemis (and one of my favorite humans I’ve ever had the pleasure to interact with and just speak to… the dude is a genius and f’n rules) said that “this era” of Say Anything is over.

“Our plans as a collective are to, kind of sort of, end Say Anything. Or “the first era of Say Anything”. Whatever you want to call it, it’s that thing. I don’t buy that shit when other bands do it, but whatever the fuck works as terminology. I need a break. We’ll return one day to play festivals and scoff at our career. But I want to say goodbye. There will be no full U.S tour to support the record or in the near future. I am done being a touring musician as my main profession. Say Anything is retiring in the sense that Jay-Z did. It’s not an indefinite hiatus or a breakup because that’s impossible.”

I encourage you all to read Max’s thoughts on how he made this decision, as well as what he says fans can look forward to – his writing, his future, his happiness.

From a music standpoint, Say Anything took things to a whole new level and perspective… mixing raw energy with tounge-in-cheek lyrics at times, to some songs where Max just said it like it is – “Shit! Nothing makes sense!”

I’ll always remember the Say Anything tours with Armor for Sleep, Straylight Run, the Warped Tours, Max’s love for my favorite band Midtown, and much more.

(Fun story – I was a freshman at Fordham University when Say Anything was recording in the Bronx, and they just had “Alive with the Glory of Love,” the raw music video come back from the director.  Well the band didn’t have Internet (they were literally living in a one bedroom apartment in the f’n Bronx in a really shitty area while recording) so their manager Randy calls me and goes, “Uhhh.. can the guys come by and see their music video?  They need to make edits on it and tell the director what they like and don’t like.”  So I went to my roommates and go, “Alright so there’s this band Say Anything (they all knew who Say Anything was) and I go, act cool, act chill. they’re on their way over.  don’t mess this up for me or my career.  Everything went great and one of my roomies gave the guys some edibles because that’s how we roll. )

This will always be honestly one of my FAVORITE moments in my life.  The Paramount in Long Island.  Max had me sing the ending to, “BELT,” and it was sheer joy for all of us.

I urge you all to make sure to pick up their new album, “Oliver Appropriate,” when it comes out.