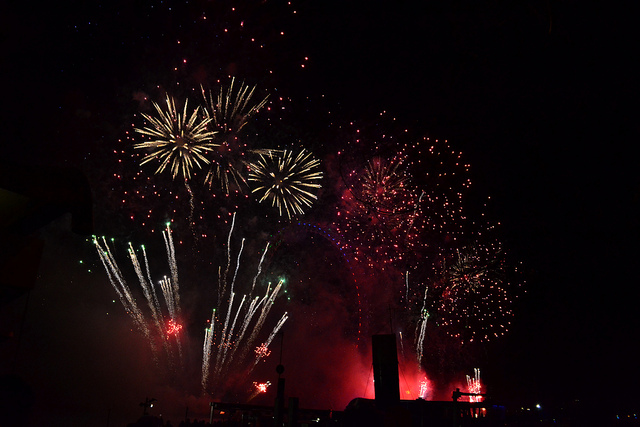 Happy New Year! Or, more realistically, Happy First Day of the Pressure to Completely Change Your Life This Year. There are a million articles out there on the resolutions you should be trying to make–but here at idobi, we think you should abandon them altogether this year. Here’s why.

1. Because making a resolution list is really just procrastinating.

You know that the same thing happens every year. You’ll go out to buy a new calendar; you’ll see slogan after slogan screaming, “NEW YEAR, NEW YOU”; you’ll feel inspired after watching videos of celebrities talking about ways they’re going to better themselves and the goals they plan to achieve. And you’ll sit down and come up with your own list of resolutions, daydreaming about all the wondrous possibilities for hours on end–as if the second the clock ticked 12:00 on New Year’s you would suddenly have all the motivation and dedication in the world to complete the same resolutions you’ve had for the past few years. Let’s face it, what are the chances of that happening? This year, instead of wasting your time imagining about a better you, you should continue your routine of Tumblr and Netflix, or hey, maybe actually just doing the things you want to do. (Emily Yee)

2. Because really, January 1st is just an arbitrary date.

The only difference between New Year’s Eve 2014 and New Year’s Day 2015 is one tiny digit (and maybe a hangover). So why are you even letting a calendar dictate when you can start things? It’s just another Thursday. There’s nothing special about it–it’s just a day someone way-back-when decided would be called January 1st. Not everyone even adheres to this calendar anyway; why not start on February 19th, aka Chinese New Year, instead? If we want to get all deep and philosophical here, dates are just a human construct, and depending on where you’re from, you’ll have a different “fresh start”. Who is right? The answer is no one, because no date in the universe could physically stop you from eating that last candy bar, or get you to go for a run in the pouring rain. So quit making up excuses for waiting until a particular super-special-here’s-to-new-beginnings date and start owning up to the fact that if your “resolutions” are not important enough to start right away, they can be put off for another day. (Alex Bear)

3. Because food is delicious.

Plan to lose weight this year? Well, we give you full permission to ditch that resolution right now. Even though it’s the most common New Year’s resolution, it’s one focused on image rather than health. So skip the diet stress and start off the new year right. Enjoy yourself! Besides, I think we can all agree–food is so much more delicious than fitting society’s Barbie doll mold for beauty. (Hannah Pierangelo)

4. Because adding to your music collection is way better than a savings account.

Listening to your grandparents’ age-old advice of starting a savings account early has probably been on your to do list for years now, and with a new year right on the horizon, you might be considering finally taking the plunge. Walking into a bank and starting the account will leave you feeling like a responsible adult, and depositing your extra cash will even be a little thrilling at first–that is, until your favorite band announces pre-orders of their latest and greatest album. The inner battle will start with “I can dip in just a little, just this time,” followed by the justification of “There are only 100 records being pressed, I have one chance to get one.” Before you know it, you’ll be making weekly withdraws for shows you can’t miss and merch you must own, and by June, your account will be drained while the thought of saving returns to the back of your head. But hey, your music collection will be nothing short of epic, and isn’t that so much more satisfying? (Emillie Marvel)

5. Because honestly, your vices are fucking awesome.

Let’s get real for a second – you love everything you know is bad for you. Alcohol, lying on the couch all day, Taco Bell…knowing how terrible these things are for you has definitely never been enough to stop you from indulging, so why would a calendar date suddenly give you that discipline? You’re going to love sex and chocolate (not the 1975 songs) just as much on January 1st as you did on December 31st; there’s just no point in lying to yourself about that. If you truly want to better yourself by abstaining from your vice(s) of choice, make it real and do it for yourself instead of doing it because the earth finished another slow rotation around the sun. (Eleanor Grace)

6. Because your lifestyle choices should be more than just a trend.

It’s about time we admit the most popular New Years’ resolutions are just trends marketed by corporations to make you feel like there’s something you need to change about yourself so you’ll buy their products. Big businesses know people make the same clichÃ© annual resolutions, so advertisers egg consumers on so they’ll buy expensive shit. From gym memberships, to appointments with a nutritionist, to nicotine replacement regimens, odds are the resolutions you’ve tried to stick to in past years have involved some heavy spending. Submitting to corporate schemes isn’t very punk rock, though, so decide how you want to start the new year for you, not some businessman sitting at a big fancy desk looking to make money off of your lifestyle choices. (Tori Bilcik)

7. Because who needs the stress over something that probably won’t happen?

It’s hard to find resolutions around this time of year that actually stick. Life is busy, and daily stress is already enough to drive people insane. Dwelling over a resolution is preparing for more stress, guilt, and most likely breaking a resolution. They’re meant to be positive changes in life, but only when the commitment is ready to be made; working hard to change bad habits is fun only if it’s what is wanted, rather than it feeling forced because of the New Year. If it’s not there yet, there’s no reason to add on stress to the list of unwanted emotions that broken resolutions brings on – you know, your average self-loathing, utter turmoil, and extreme despair. Take the time to prepare to break bad habits, and remember that unbreakable vows are for evil acts and not cookie eating. (Shelby Chargin)

8. Because you are inevitably going to suck the fun out of life, and that’s not how you want to start your new year.

Let’s face it, the only reason you made something your new year’s resolution in the first place is because you wanted to push it off as long as possible. You have literally made the excuse, “I’ll do that next year.” So, deep down, you’re probably dreading your feeble attempt at keeping this year’s resolution. This means that every time you drag yourself to the gym or pass up one of Grandma’s holiday cookies, a little part of you dies inside. Not to mention you’re probably going to have to skip going out with your friends to stop yourself from breaking a resolution that, at this point, you are questioning your choice in making in the first place. Don’t start the year off depriving yourself of the things you like to do. Keep a resolution because it’s something you want to implement into your lifestyle, not because the date on the calendar tells you to crack down on it. (Jenna Cafora)

9. Because we’re all going to die anyway so what’s the point?

10. Because you should just be yourself (unless you can be a unicorn).

Resolutions often seem like great ideas and can affect your life positively, but who says you have to make these promises anyway? What if you’re perfectly content to keep on living the way you’re currently living? Sometimes it’s in your best interest to just keep doing your own thing and see where it takes you. Maybe you’ll end up reinventing yourself or making a resolution later in the year, but in the end, all that matters is your happiness and staying true to yourself. Don’t worry about making self-improving resolutions – it’s perfectly okay to just be you. Unless you can be a unicorn. Or a mermaid. Or a pirate or a dragon or…well, you get the picture. Like Bruno Mars says, you’re amazing just the way you are. (Sam Devotta)