Most Wanted for: Blurring the lines between gender roles with copious amounts of glitter punk. 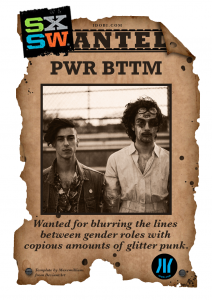 With a name like PWR BTTM, you can’t help but want to find out if the band truly is as bold and unapologetic as they claim to be. One listen and you’ll find out that they really are, with big guitar shreds meant for arenas and a stomping drum track loud enough to make up for the lack of other instruments. And they don’t tone it down live either–bringing out the drag performances from the duo’s early days while rocking out on stage. PWR BTTM raises up a big middle finger to the establishment of heteronormativity, all while genuinely writing catchy songs about identity and growing up.