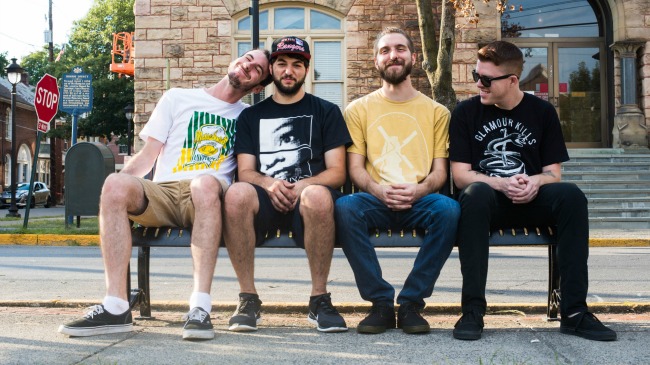 1. Through our time touring we’ve been around the country multiple times, been to every city you could think of, but every time we roll into Charleston, SC,  it’s always a special occasion. Since the first time we played there, we were always fed, housed, and shown a good time. Thanks to PJ Taylor and everyone in the Charleston scene, we are treated like family the second we roll into town and that is honestly one of the best feelings you could have when out on the road. Everything from drunken nights adventuring around one of the most beautiful cities in the US to playing a packed out show at the second floor of an Italian restaurant, Charleston will always be a second home to Firestarter and have a place in our hearts.

“Him and his friends were some of the first people we ever saw singing along to our music outside of our hometown.”

2. Firestarter fans have always been amazing and supportive, but a select few have taken that support to the next level and displayed it on their bodies. Even though we still are a small band relative to many others in our scene, it’s so humbling to see something related to our band tattooed on someone. The first time we played Providence, RI we met a dude named Paul and his girlfriend Cait who had been fans of ours for some time. He bought almost every item of merchandise we had available at the time and a few short weeks later, a picture surfaced online of our “F” logo tattooed on his body. The “F” we use as a logo, represents every aspect of our band and our name obviously, so seeing that tattooed was absolutely wild and awesome to see.

“We had a wild and interesting night on the town, all thanks to Zach.”

3. We couldn’t write this segment without mentioning Austin, TX and all of our friends and fans from there. We made it out to Austin on our first tour and that show sold us on coming back on every tour we could. The city lives, eats, and breathes music as well as being one hell of a place to party so who could say no to that? A fan named Richard had found out about us on the internet shortly before the tour and convinced a group of his friends to come out to the show. Him and his friends were some of the first people we ever saw singing along to our music outside of our hometown of Albany and that will always be something we will remember. Every show since, more and more people came out, most of them being friends of Richard and our close friends in the band Nominee who have housed us every time we come to town. Without either of them, we might not have a reason to come through Austin and for that we are forever thankful.

4. Las Vegas, NV, sin city and home to a fan and close friend, Zach. The second we mentioned coming to Vegas for the first time on our social networks, he was the first to reach out and lend a hand. Zach helped us land a show with Last Call, Allison Weiss, and Koji in town and brought along his friends to the show. Besides getting us on an awesome show, he put us up for the night, fed us, and took us out on some of our first times on the Vegas strip. Alongside our close friends in Post Season, we had a wild and interesting night on the town, all thanks to Zach. The next morning, we awoke to mechanical issues with our van that could have stopped our tour in it’s tracks, but he hooked us up with a mechanic and drove us to Autozone to get the parts we need. Because of him, we were able to make our next show and finish out the tour. We owe him a lot.

“Without that house or that band for that matter, we wouldn’t have a lot of the friendships we do today.”

5. Finally, we cannot forget the wonderful sunshine state of Florida. Very much like Austin and Charleston, Florida was one of the first places as a whole outside of Albany that sang along, had fun with us, and treated us like family. On our first tour, we played one of the first shows ever at a small venue called The Goat House (RIP) in Odessa outside of Tampa. Thanks to Djack Jallo and the whole Tampa crew, we always had a place to play when we came through and a place to rest our heads afterward. A short ways from there, Orlando always be the place we end up after an awesome show in town or even be the venue for said show. We will never forget people diving off the stairwell as we played, sweating out their body weights with us, and partying with us after, treating us like close friends. Without that house or that band for that matter, we wouldn’t have a lot of the friendships we do today in that beautiful, but ungodly hot/muggy state.

Watch out for more Fanuary love all month long, right here on idobi.com!

Tags: 5 Times My Fans Were Cool As SHit, Fanuary, Firestarter