Metalcore cover kings I Hate Heroes are back at it again with a special rendition of Fall Out Boy’s infectious “My Songs Know What You Did In The Dark”. So why haven’t you head it yet? Because it’s premiering right here, right now.

“We covered Taylor Swift’s ‘Blank Space’ last year and it was received really well by our fans. This time around, we were listening to a number of pop songs to see which one we wanted to cover next. A few of the band are Fall Out Boy fans and when we heard “light em up…” we knew we wanted to cover it! It’s catchy, it’s fun to play and sing along to, and no-one else had covered it.” 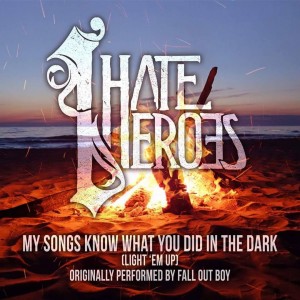 The band is on a fast track to success right now, with the release of their album  If Life Were A Book, I’d Skip This Chapter  last summer, performing at select dates of the 2015 Vans Warped Tour, and their upcoming March trek. Listen to the cover below, then catch the band when they roll into your town this month!