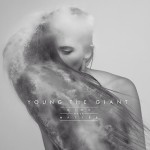 After Young The Giant’s incredibly successful first record, many were curious to see if the California-based rockers would fall prey to a less-than-stellar sophomore album. It’s not often that a band crushes it out of the gate on their first record and are then able to consistently release album after album of equal or exceptional quality. Many of them spend years trying desperately to reach the bar set by their first record, and many of them fail.

Thankfully, Young The Giant’s second album Mind Over Matter has, at the very least, reached the bar set by their self-titled first album – which is no easy feat, considering the album saw incredible commercial success with two of the biggest singles of 2010 in its roster. “My Body” and “Cough Syrup” were able to tread the line between rock and pop in a masterfully brilliant way, launching them into the sphere of stone-cold hits. The rest of the record was equally as enjoyable.

The band uses the momentum forged in their first album to enhance and amplify the elements that make them unique. With Mind Over Matter, they’ve transformed from lovable indie rockers to arena-worthy warriors. The opening track sure suggests such a change – “Slow Dive” is a 48-second instrumental crescendo, sure to whip crowds into a frenzy of anticipation of an impending rock show.

The following two tracks, “Anagram” and “It’s About Time,” are perhaps the two that most closely resemble the sound found on their first record. “Anagram” is an upbeat track, its syncopated rhythms perfect for dancing around to (this can be personally verified, too). The chorus features the soaring vocals we’ve all come to know and love from the quintet. “It’s About Time,” the album’s first single, is a bit darker in tone, sounding almost apocalyptic in its beckoning for revolution. It might be a little trite and familiar of a song, but it’s so damn catchy that it doesn’t matter.

The second single off Mind Over Matter, “Crystallized,” is just slightly over produced. The embellishment of a synthesized keyboard played along with the melody of the chorus is a bit too much, detracting from the earnest love-song lyrics. In fact, perhaps the one downside of this record is its overuse of synthesizers. The namesake track is another example of that – the synth strings are a bit too over the top. Without them, though, the song has an easy to love R&B feel to it that’s different (a good different, of course) for Young The Giant.

“Daydreamer” feels like it came straight from the ’80’s with its synths (again…) and lead singer Sameer Gadhia’s deep vocals in the verses of the song. The chorus soars in typical Young The Giant fashion, elevating the song from a mediocre track to one you probably couldn’t hate even if you wanted to.

The next two tracks, “Firelight” and “Camera,” slow things down a bit. “Firelight” is easy to listen to, beautiful and ethereal in its simplicity. The song swaps a lot of the electronic elements for a quiet, plucking guitar rhythm, giving Gadhia’s vocals room to breathe. “Camera” picks up with the synths again, but in a softer way that still allows for the vocals to shine and be the focus of the song. It is faster-paced than “Firelight” – which is good, because if it weren’t, the two songs would sound too similar.

“In My Home” is another classic Young The Giant track, getting us right back on the indie rock train. Lyrically, the song seems to be about the rock star lifestyle, with Gadhia singing, “Yeah we sleep in cars oh so far from home, watch the sun go down on the open road / I’ve been searching for this part of my life.”

Closing tracks “Teachers” and “Paralysis” turned out to be unexpected personal favorites off Mind Over Matter. “Teachers” is another upbeat, pretty straightforward rock song. Perhaps one of the biggest reasons it’s so appealing is because it sheds a lot of the ill-used production flourishes found on some previous tracks. “Paralysis” still makes use of those electronic elements, but as with “Firelight” and “Camera,” it is done in a tasteful way that doesn’t detract from the song itself. “Paralysis” sounds a bit like Arctic Monkeys latest release, AM, in its smooth vocals and R&B styling, while still retaining its Young The Giant essence.

Mind Over Matter is undoubtedly a successful second record. It manages to retain a lot of what makes Young The Giant unique – impressive prog-rock guitar, fast-paced drum fills, soaring vocals- without being a carbon copy of their last record. Bands change and grow, and the music they make should change and grow with them. Mind Over Matter does that in a fun, enjoyable way – even if it might be a little synth-heavy at times.