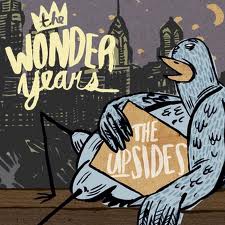 Many times switching labels involves a jump to what many call a ‘major’ and the re-release of an album to a much larger audience, this is not the case with The Wonder Years.   “I’m not sad anymore / I’m just tired of this place / the weight of the world would be okay / if I could pick a shoulder to lean on until I can stand up straight” is the somber verse that kicked off this album when it was originally released earlier this year.   The visceral honesty in the words of Dan ‘Soupy’ Campbell remain as strong as ever, with even more emotion displayed on the four bonus tracks included for this edition of The Upsides.

Changing camps from No Sleep to Hopeless records and in turn re-releasing their second full length gave the band a new opportunity while remaining on a small label.   This summer, idobi sat down with the band to discuss the label transfer and the new record.

“No Sleep keeps signing awesome bands.   But that is one guy working tirelessly versus 15 people working tirelessly and it’s a whole new ballgame.   Chris is doing the marketing and PR and making sure its in stores and doing sales stuff.   He is doing it, not just for our record, but also for every other record coming out at that time.   There is someone at Hopeless who does every one of those things”, said Dan ‘Soupy’ Campbell in a recent interview with idobi.

This album shows the leaps and bounds that the band has improved by since 2007’s Get Stoked On It.   Cleaner production stands above everything else, with cleaner vocals, sharper guitars and just the right amount of keyboard.   The lyrics on The Upsides show an incredible growth by Campbell.   The real-life examples used in each and every song translate very well and provide something tangible that the listener can relate to.

Many bands are called pop punk but few are able to showcase each word in the music that is made.   Many of the lyrics, see “Dynamite Shovel”, can certainly be placed in any punk catalog and feel at home while many of the guitar riffs and choruses, such as “This Party Sucks”, are at home in popular rock anthems.   Each track has the substance to stand alone yet they all flow together to create a very uplifting message of realizing that being sad gets you nowhere.   You need to be happy with what you have, and if you are not then do the things you need to do to get there.

Now, the meat of the issue is assessing the four new tracks.   As always, they are attached to the end of the album and can even function as a separate EP because they are not meant to flow with the original twelve tracks.   “I’m Scared and I’m Sorry” is a breakup song that is much about moving up and moving on than another with the same subject on the original release.

It doesn’t hit with the poppiness “Melrose Diner” although it still delivers the punch with a lot of force.   Where “Melrose Diner” was a straight up fuck you to the person it was written about “I’m Scared” deals with moving on and being positive and better after the ending of the relationship, similar to the positive message on the original release.

The idea of sitting some friends in a room with an acoustic guitar to re-record a one-minute song seems like a whole lot of fun.   The end result of “Dynamite Shovel (Campfire Version)” is just that, as someone yells ‘that could be perfect’.   It is a perfect example of the camaraderie that this band inspires at each and every show.

The third track on this re-released edition of The Upsides is “Logan Circle: A New Hope” which sees the track slowed down considerably with plenty of complementary lyrics to fill the addition space in the song.   The optimism is not lost although the usual up-tempo style has been transformed.

The final track on this latest release by Hopeless Records’ newest band was written about a friend in dire need who had passed away by the time the song saw daylight.   It is a gripping letter put to music that seems to have been very cathartic for its writer(s).